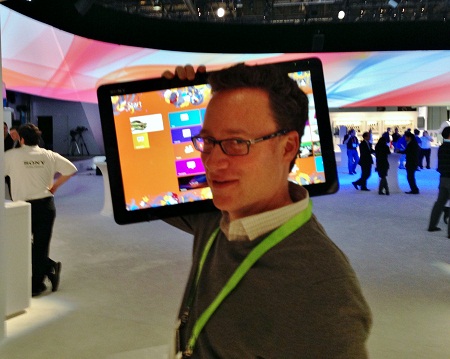 CES 2013— Sony’s CES booth provided no shortage of wows, but one of the more unusual products we spotted was the new 20-inch Sony Vaio Tap 20 Mobile Desktop. Yep, you read that right: 20 inches. While designed to be an easily movable desktop computer, the Sony Tap 20 also functions exactly like an oversized tablet. Whether or not you choose to use it that way depends on how you feel about lugging around 11 pounds of fragile glass and metal. But if you’re up for it, the touchscreen and fold-flat integrated stand let the Tap 20 function on a flat surface as well as it does in desktop mode.

Under the hood, the Sony Tap 20 is built like a fully-featured desktop, offering a choice of i3, i5 or i7 Intel Core processors, and running Windows 8. Traditional hard disk drives give it up to 1TB of storage, but add to the unit’s heft. A DC-in port, Gigabit Ethernet jack and two USB 3.0 jacks give it better connectivity than a tablet. The 20-inch display has a native resolution of 1600×900 and is powered by Intel HD Graphics 4000 chip. Notable absences include an optical drive and HDMI input, which does slightly limit the Tap 20’s multimedia usefulness.

Sony is targeting the multiple-user audience, like families, where the Tap 20 can be assigned to desktop homework duty one minute, and be transformed into a table-top multi-player gaming tablet the next. While many take Sony’s description of “portability” with a grain of salt,  there’s no doubt that it’s an interesting design, one we imagine people will find innovative ways to utilize. Just don’t expect to see anyone reading an eBook on the subway using it. The Tap 20 will cost between $899 and $1199, and is available now.

Your Summer Hiking Essentials from Abt

Samsung T9000, A Chilling Machine Sent From the Future