Tomorrow, August 10th 2012,  Abt will be premiering Samsung’s brand new 75″ LED 9000 Series Smart TV from 6 pm – 8 pm on our showroom floor (1200 N Milwaukee Ave, Glenview, IL, 60025).  Originally debuted alongside Space Shuttle Enterprise, this Samsung flat screen TV is longer, corner-to-corner, than any one of the USA Olympic ‘Fab 5’ Gymnasts, and is only as thick as the gold medals that they won.

It’s not just a pretty face either, this baby’s got brains to match.  Besides being 3D-ready, the 9000 Series has a built-in web camera that retracts when not in use, comes with four pairs of 3D glasses, and has all the Smart features including Smart Interaction for enabling gesture and voice controls. TV viewers can use Smart Content for sharing media across a variety of devices, enjoy a new Angry Birds app which let’s users control the game entirely with gesture controls, and more.

Again, the event begins at 6PM CST and will last until 8PM CST in the Atrium at Abt Electronics in Glenview. If you’re interested in attending you must RSVP . All attendees will also be eligible to enter to win a 46″ Samsung LED 8000 Series Smart TV and there will be a Samsung technical concierge on-hand to answer questions and offer demonstrations of the LED 9000.

Come see it for yourself! 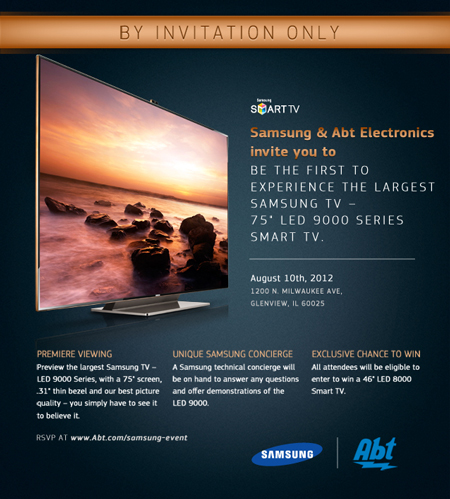 Family Matters at Abt Electronics
Is a sound bar right for you?
0 Comments
By Pete R