Chicago Fire at Abt! 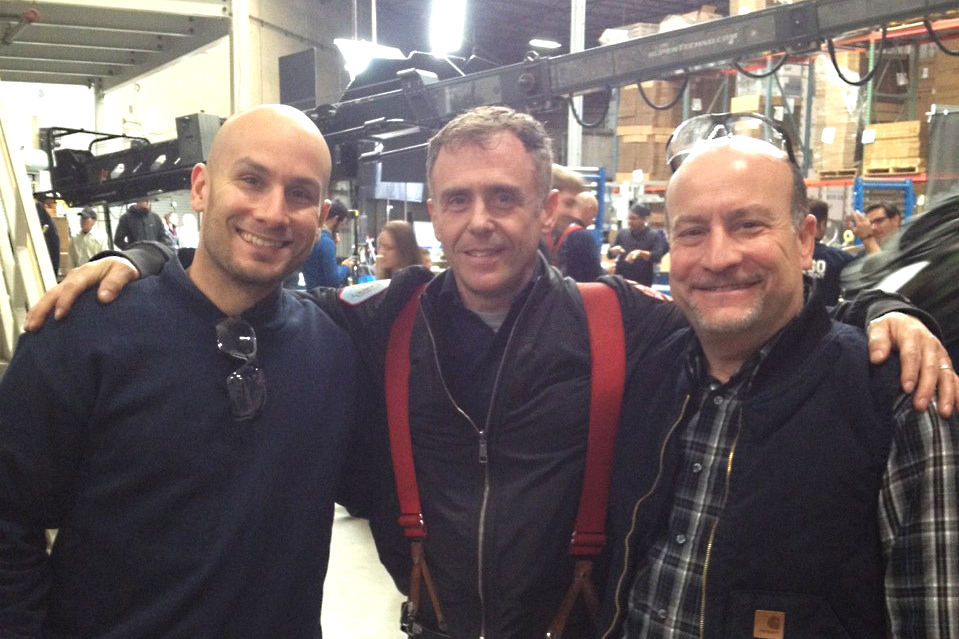 Chicago’s been a real hotspot for TV and film locations in the last few years, from the blockbuster Batman movies to the popular Chicago Fire and Chicago PD TV series. While Batman Begins and The Dark Knight films used Chicago as a stand-in for the fictional Gotham City, Fire/PD programs are obviously set in Sweet Home Chicago and also do all of their filming here. Late last year, Abt was approached by the production company behind Chicago Fire about using our building for some on-location shooting. With hundreds of thousands of square feet of indoor space, throughout several buildings, Abt has a variety of features that can make great backdrops for filming. There’s warehouse space, office cubicles, a fully-equipped woodshop, working kitchens, a world-class indoor theater…tons of variety to offer an eager filmmaker (We’ve previously had cameos in TV commercials for the Illinois State Lottery Commission and BMO Harris Bank). Chicago Fire was specifically interested in our warehouse. 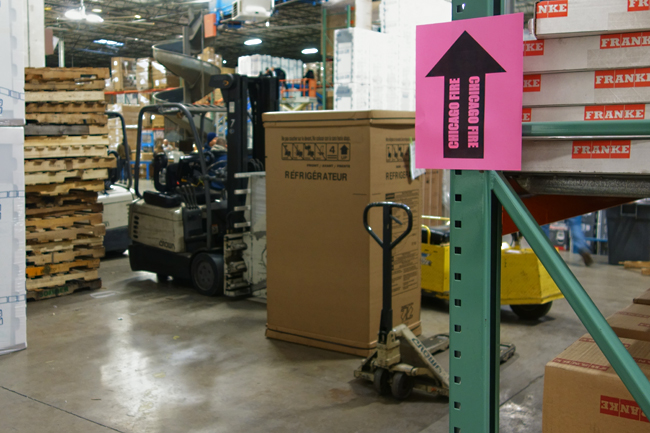 A sign points the way to the warehouse filming location.

For a particularly nerve-racking scene, they needed a factory/warehouse-type setting which had very high ceilings, stacks of boxes, and a suspended conveyor belt from which a victim would hang. Well, we had all of that, but all of our conveyor belts are on the ground. The showrunners had a fix for that, and brought in crew to build their own elevated conveyor belt. 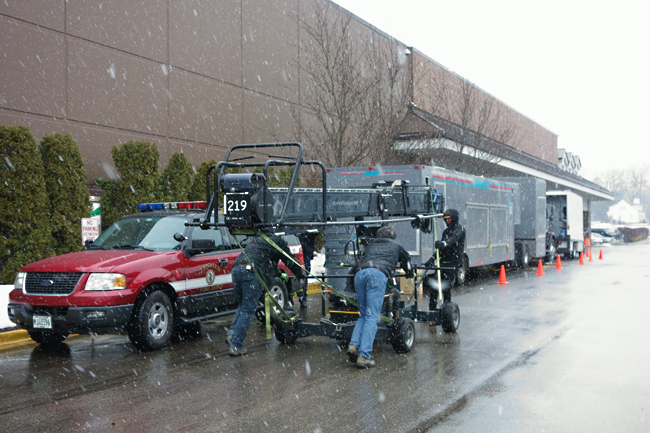 Crew moving a crane into the store while it snows outside. 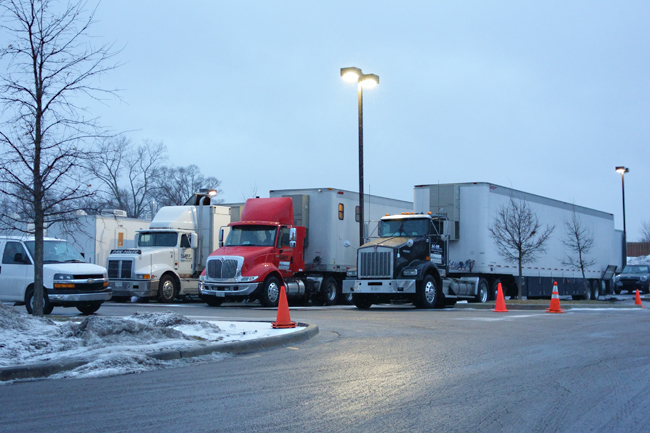 Just a few of the cast and crew trailers in the parking lot. 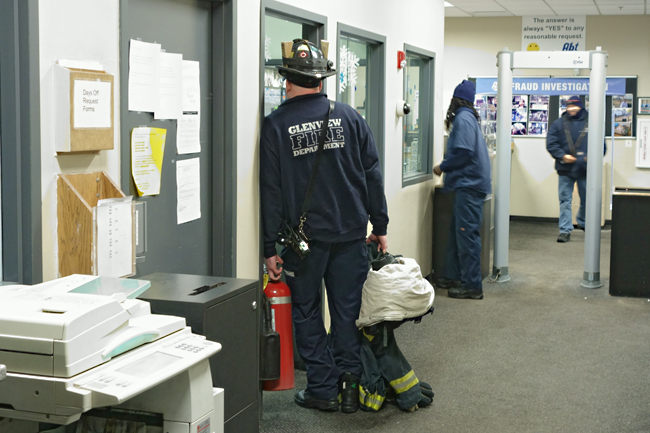 Real-life firefighters from the Glenview Fire Department stopped by to consult.

The crew came in on a Wednesday to begin construction of the necessary set piece. By Thursday, it was up and ready to go, and the  filming & lighting crew and actors arrived. The most surprising thing about getting a behind-the-scenes peek at the production of a major network TV show is just how massive an operation it is. An entire section of our parking lot was cordoned off for the fleet of equipment, makeup and actors’ trailers. Between on-screen talent, the grips and camera operators, directors, stuntmen and everyone else involved, there were at least a hundred people milling about.  In addition to all of the official Chicago Fire personnel, the production team dipped into the Abt employee pool for even more extras. We’ve got some big Chicago Fire fans around here, and they gladly jumped at the chance to share the screen with their favorite firefighters. So after hours of preparation and rehearsals, shooting officially started mid-afternoon, and went well past midnight.

In the down time between takes, actors and crew wandered the halls and showroom of Abt, and many even did some shopping. Interestingly, many of them seemed to be as fascinated by their behind-the-scenes look at Abt as we were to see the inner-workings of a TV show. Some of the stars even did some impromptu acting via Vine:

Everyone involved with the filming was super kind and a pleasure to work with. All the actors were class acts, happily stopping for photos with employees. We were unfortunately not allowed to take any photos of the actual filming, but our extras did get some great snaps with the show’s stars. 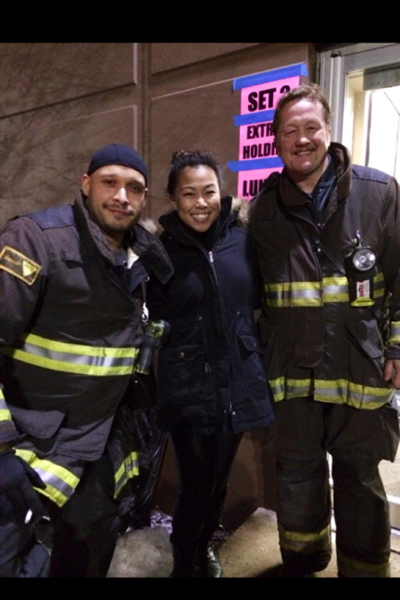 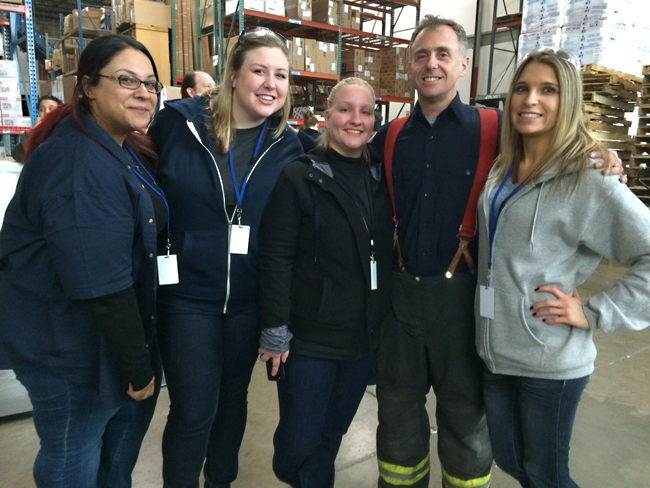 After weeks of waiting, Abt made its prime-time TV debut Monday, February 24th. None of us were privy to plot information, so it was exciting to see where we fit in. An establishing view of the Abt warehouse, shot ultrawide from high above the ground,  opened one of the main rescue sequences just minutes into the episode. Beyond the additional conveyor belt the crew built, not much else was changed: 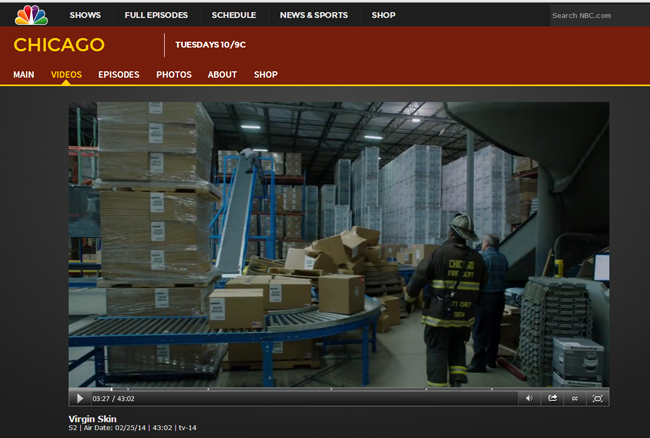 One of the shots from our scene. Notice the conveyor belt/ramp on the left side. 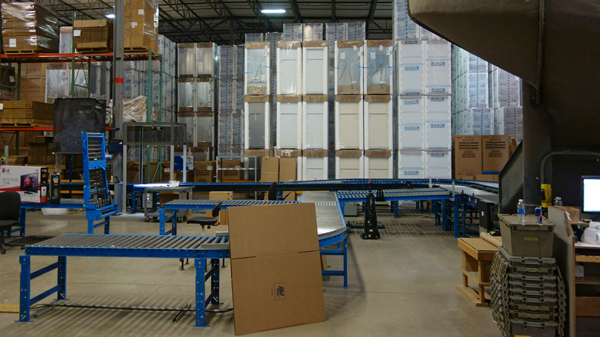 What the warehouse normally looks like from the same angle.

The same day the show aired, Abt received a special gift from the cast of Chicago Fire: 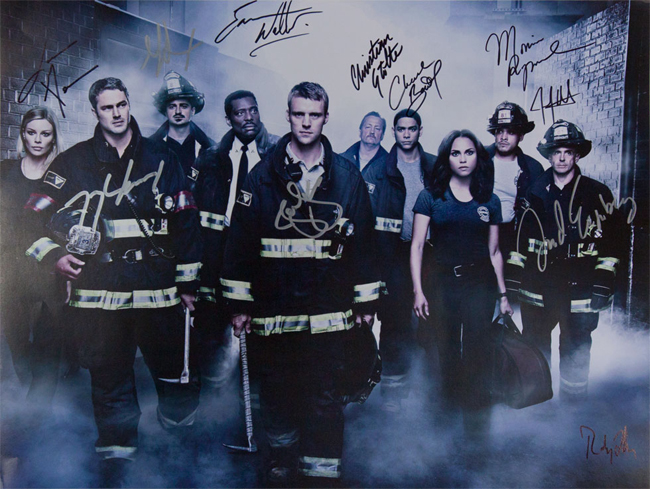 This over-sized, signed Chicago Fire cast photo will be added to our celebrity Wall of Fame.

Overall, taking part in this production was a great experience. The crew was in and out of Abt with as little disruption to our daily operations as possible, and left us with some great memories. We’re looking forward to the next opportunity we get from the Chicago Fire or Chicago PD programs, or any other Chicago-based productions looking for a place to do some filming. If you didn’t get the chance to catch Chicago Fire when it aired, you can still watch it and previous episodes online for free at the official NBC site here: https://www.nbc.com/chicago-fire/episodes