Welcome To The Madhouse 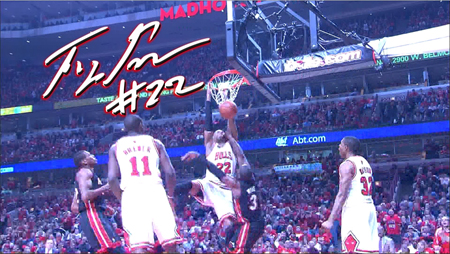 Dear Dwyane Wade,
Welcome back to Chicago.  Hope you enjoyed your stay at the Madhouse on Madison.
Signed, “The Taj Gibson School of Dunks”

Taj Gibson came up HUGE for the Bulls in their dominating victory over Miami, 103-82. It was a close contest for most of the first half — until Tom Thibodeau made the call to rotate in some of his bench. That’s when the Bulls started showing that they are more than 3 good players, they are a TEAM. Combined with some great marketing by Abt (check the scrolling banner above D-Wade getting posterized), power forward Taj Gibson converted C.J. Watson’s pass on the 3-on-1 breakaway and slammed over D-Wade.  Is it safe to say that the inspiration for the dunk came from the Abt advertisement? We may never know, but people do get pretty excited about all the different products we carry.

Nothing like your starting 5 being complimented by your bench, who effectively owned Miami’s Big-3.

And, according to Wade’s Twitter account, even his kid got in on the action:  (dwadeofficial) I had 2 laugh at ths..I was playing my oldest son Zaire on his nerf rim & he dunked & said Gibson while screaming..L2MS Kids u gotta luv em