Wearable Technology: The Future is Now. Part I

If we were to sum up one of the biggest current tech trends, and one that will make 2014 a very exciting year, it would only take two words: wearable technology. What is “wearable technology?” (Hint, it’s not Flava Flav’s clock pendant). The term covers lots of products, but they all have one thing in common: advanced technology fit into a gadget that can be worn on the body in an unassuming form factor. Wearable technology takes shape in a variety of types, from smart glasses to wrist-mounted computers.

But what was the stuff of science-fiction movies just 20 years ago is now a reality, and is everyday marching closer to being the norm.

Wearable Technology has become a real buzzword in just the last year or so, but many people don’t realize how much it’s been present in our lives in recent years, especially the fitness industry. Visit any gym, and you’re bound to see dozens of people wearing heart rate monitors. A simple transmitter straps to their chest, measures their heart rate and beams that info to their wrist watch. That’s wearable technology. Garmin added to the heart rate monitoring wristwatch concept by integrating GPS into many of the Garmin Forerunner GPS Watch models. These track your heart rate and also accurately measure the distances you run. 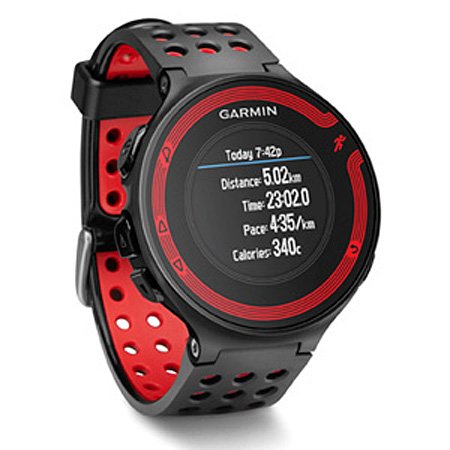 But likely the most common piece of fitness-related wearable technology, and one which has really propelled the entire trend of wearable tech itself, is the simple activity tracker. The most well-known brands of activity tracker are Fitbit, which has been around since 2007, and Jawbone. Both of these brands produce inconspicuous rubber bracelets which house an assortment of sensors that track and analyze your daily movements. You then download this data to a smartphone or PC to see how much energy you’re spending, letting you adjust your diet as necessary. The system includes motivational tools, like the ability to sync with and challenge your friends. Check out Ken’s video on the Fitbit for a little more info:

You’re likely to see the Fitbit and Jawbone adorning wrists outside of the gym, as they’re meant to be worn 24/7, even while sleeping.

Take the activity tracker and supercharge it, and you’ll get one of the most dreamt-about pieces of wearable technology: the Smart Watch, a wrist-mounted device that holds a miniature yet fully-functioning computer. You’d use it to make phone calls, take pictures, even connect to the internet. It’s an idea that really gained steam as cellphones got smaller and more powerful,  but for years every attempt fell flat. The available technology simply hadn’t advanced to the point where a Smart Watch would actually be useful, or it would be insanely expensive.

But in the past few years we’ve seen rapid advancements in technologies like super-thin LED or OLED screens; lightweight, high-capacity rechargeable batteries; and tiny, yet powerful System on a Chip (SoC) units. An SoC packages everything needed for a piece of wearable technology—the processor, memory, cellular antennas, imaging sensor—onto a single integrated circuit. The space-saving design is what makes our modern smartphones possible, and what has led to the first commercially-viable Smart Watches. Manufacturers can finally fit enough cool stuff into a watch, and make it work properly, that it’s an invention worth bringing to market.

And just like that, there are now multiple Smart Watch models available to the consumer. At CES 2013, Abt checked out the I’m Watch, one of the first advanced Smart Watches to be introduced:

This year we also talked to Sony about their new SmartWatch 2:

The SmartWatch 2 basically acts as an extension of your Android smartphone. Once connected to your phone via Bluetooth, you can control most of your phone functions right from your wrist. Get text messages, check Facebook, adjust your musical selection and even act as a remote monitor for your smartphone camera.  You can also answer and end phone calls with the SmartWatch 2, but you still need an external headset to actually talk into.

That’s where the Samsung Galaxy Gear Smart Watch comes in. The Galaxy Gear does all the same things the Sony SmartWatch 2 does, but it also lets you make phone calls right from your wrist. That’s right, just like Dick Tracy. It links to your Smartphone with Bluetooth, and acts just like a wireless headset, letting you take and place calls. The Samsung Galaxy Gear also has a 1.9 megapixel camera integrated right into the watchband, for covert photography.

The extra features in the Samsung Galaxy Gear do give it a much shorter battery life span than the Sony, with just “over 24 hours” compared to the Sony’s 3-4 days. So, different uses, different benefits.

Another angle to the smart watch is the Pebble Watch. The Pebble works like the previous smart watches, but with limited functionality. By using an e-ink display similar to the type found in e-readers, the Pebble has an impressive 5-7 day battery life, and is easily readable in the sun. However, it’s not touch-sensitive like the others, and doesn’t display in color. It’s most useful for users who’d like to get important info sent from their phone, like text messages or caller info, but don’t need the full smartphone experience on their wrist.

Whatever the pros and cons are of each model, they are all still impressive bits of technology, and a dream come true for the sci-fi fans of yesteryear. The one major limitation to all smart watches, however, is that they all still need to link to your own smartphone for your to fully enjoy all the functions. Of course, it’s only a matter of time before we get there, and after that there’s no telling where wearable technology will take us.

Check back later as we explore what Wearable Technology we’ll be hanging on our heads!