Even though we stayed closed on Thanksgiving and didn’t open super early on Black Friday, the past shopping weekend was one of the best Abt has ever had. We’d like to send out a huge thanks to everyone who chose to shop Abt on Black Friday and Cyber Monday, and who continues to do so this Holiday Season and beyond. See the press release below—which was picked up by outlets like Yahoo! Finance and The Boston Globe—for details on what made this Black Friday a success. 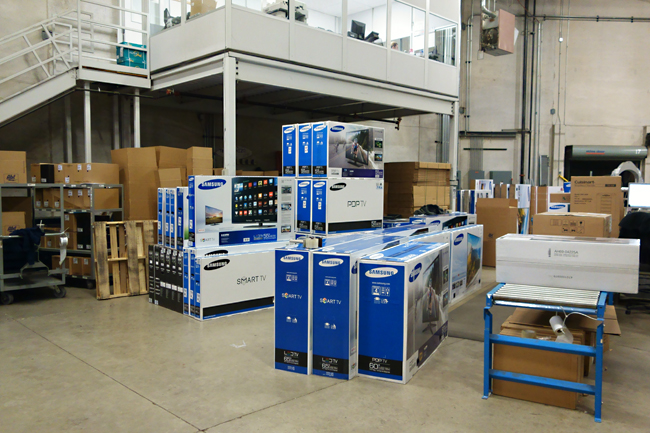 Stacks of flat-panel TVs ready to be shipped from Abt on Cyber Monday.

GLENVIEW (December 2, 2014) – Holiday shopping for the consumer electronics industry officially kicked off on Black Friday, followed by online deals on Cyber Monday, thanks to must-have items with unbeatable price tags. With affordable high-end HDTVs, tablets replacing traditional laptops, wireless speakers for connected homes, and wearable tech for healthy lifestyles, the consumer electronics industry is off to a strong start this season, according to Abt Electronics and Appliances, the nation’s largest independent electronics and appliance retailer.

Abt experienced an increased amount of traffic both in store and online at Abt.com during Black Friday with consumers looking for the latest tablets, HDTVs and wearable tech. Abt gained a 54 percent increase in the retailer’s e-commerce sales on Black Friday and a 25 percent increase in in-store sales, when compared to previous year’s sales. This had a positive effect on website traffic as well, which was up seven percent from last year.

Nationwide, holiday weekend sales were down 11 percent this year, but bucking the trend, Abt saw an upswing, especially online where customers started shopping on Thanksgiving Day. “With lifestyle trends pointing towards even more connected individuals and homes, it’s not surprising to see consumers are spending more on the latest technology, such as wearable tech and tablets.” said Abt’s co-president Jon Abt.

Recognized for their unmatched customer service and named one of Chicago area’s Top Workplaces for 2014 by Chicago Tribune for the fifth consecutive year, Abt also saw 25 percent increase in the volume of online live-chats with trained sales and customer service associates from 2013.

According to the Abt experts, an increase in sales of HDTVs and 4K TVs, tablets, and home automation systems, such as Nest Thermostats, are expected to continue through the holiday shopping season, making for a tech filled holiday gift-giving season.

Abt Electronics and Appliances
Founded in 1936, Abt is the largest independent, single-store retailer of electronics and appliances in the country. This third-generation family-run business provides unparalleled customer service with its team of 1,200 expert staff members at its Glenview, Illinois-based store which boasts a 107,000 square-foot showroom on 37 acres. The company has been recognized by Chicago Tribune as one of the Top Workplaces in Chicago for five consecutive years, taking the #1 position in 2012 and 2011. Abt services customers nationwide through its website, where customers can receive advice and customer support through the site’s live chat feature, email and toll-free phone number. Abt has its own 12,000 square-foot recycling center and features an atrium where customers gain access to its boutique stores-within-a-store such as The Apple Boutique. For more information, visit www.Abt.com.