See that TV in the Special Gifts for Dad posting below? That’s a 42-incher, which is a pretty decent size for your average room. Now imagine adding another 66 inches to that, and you’ll have some idea of the size of the Sharp Model LB-1085 LCD TV. At 108 inches, this massive, full HD 1080p television is the world’s largest commercially available LCD monitor, or at least it will be when it comes out in a few short months (September to be exact). 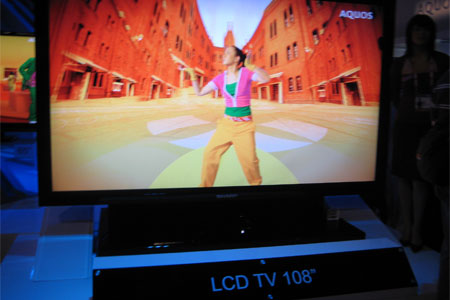 If you visited our store earlier this year you may have seen a prototype of the LB-1085, which we had on display for a few weeks. This TV employs 8th generation glass substrates, which allow Sharp to produce LCDs in super-large sizes. The LB-1085 offers a variety of inputs, including HDMI and DVI-I, and its fan-less design reduces noise and the intake of dust, heightening its level of technical sophistication.

Be ready with something in the neighborhood of $100,000 and a huge viewing area, and this giant TV can be yours. People on your screen will be as big or bigger than you are. The tears of American Idol runners-up will look like saucers. Monsters will finally be monster-sized as they crush whole cities. Who can resist that?