There’s probably no annual event more focused on the TV than the game that decides the champion of the NFL. We can’t use its name, but you know the game we’re talking about. New England and Seattle will be battling it out next Sunday and it’s going to be…Super.

If your TV’s not up to snuff, there’s no better time to buy one than right now. Whether you’re springing for a big screen for your den or a secondary TV for the kitchen or bathroom, we’ve got what you need. In this list of TV suggestions, we’ve highlighted models from a variety of brands, at all price points, with every feature you can imagine. With one of the largest TV inventories anywhere, all of the TVs listed below are in stock and ready to be taken home. Order by January 23rd and receive free nationwide shipping in time for the Big Game.

This guy is a perfect secondary TV, so folks grabbing a bite to eat or heading to the bathroom won’t miss out on any of the action. It’s small enough to fit on a shelf but large enough to get a decent view of the game. And built-in Smart functions mean it can access the web, so you can get updated game stats, replay the best commercials or talk trash to your buddies on Facebook.

If you ask us, 40″ is the absolute minimum size for a den where more than a couple people will be watching. Years ago, even a 40-incher was costly. Today, you can pick up this 40″ Full HD LED TV from Toshiba for just under $300. Perfect TV for that first apartment or basement rec room.

The refresh rate of a TV (measured in Hz) is a sign of how well the display handles fast motion. A higher number is better, meaning you’ll see less of the blurring you sometimes see on a flat-screen TV when watching a fast-moving sporting event. For most people, it’s the second most important figure on the specs list right after resolution. 60Hz is the default for entry-level TVs, while most higher end TVs are at 120Hz or higher.  This LG packs a 120Hz refresh rate and a Full HD 1080p picture on a 50-inch display for only 500 bucks.

Ask any videophile and they’ll tell you Plasma TVs are still tops when it comes to ultimate picture quality. Their vivid, contrasty displays give you deep blacks and great color reproduction, and because plasma TVs refresh at 600Hz, motion blur is practically nonexistent. At 60″ and less than $800, this big-screen beauty—one of the last few plasma TVs available—is probably the bang-for-the-buck TV of 2015.

4K TVs have been on the market for a few years, and we’ve already got a few 4K TVs under $1000. While it’s true that nothing—including next weekend’s game—is being broadcast in 4K yet, that doesn’t mean you can’t enjoy the benefits of a 4K TV. These sets generally have better contrast and color than a normal HDTV, plus their upconversion processors can make even a High Definition signal look better than ever. This trio of 4K TVs is at the sweet-spot 65″ size, where you’ll really notice the extra clarity.

If you’ve got the room for it, nothing immerses you in a football game or blockbuster movie like a giant TV screen. We’re talking a screen that’s larger than the average human is tall. Once the stuff of sci-fi movies, there are now more than a few LED TVs of that size available. The Sony XBR features a glorious 79″ display with 4K resolution and a picture that’s been called the best in the business. You’ll also get a free 4K Media Player and wireless subwoofer through the end of the month.

If you’re interested in sheer screen size, the Sharp 90″ is one of the largest non-curved flat panel HDTVs available. To help visualize the screen size, imagine four 46″ LED TVs tiled to form one giant display. Now that’s a Big Game. 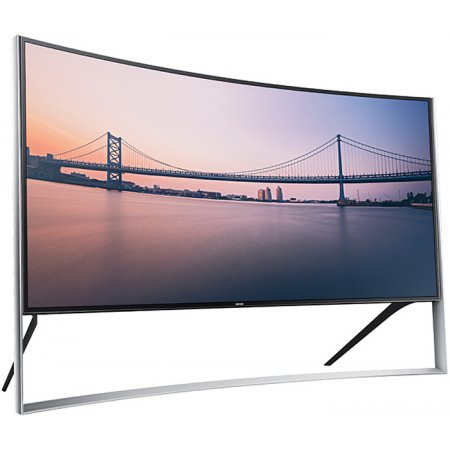 Okay, so this is probably more the kind of TV you’d buy after you win the Big Game. But we’d be remiss if we didn’t add it to this list because, well, it’s the ultimate TV available today. With a curved LED panel that features a better-than-UHDTV resolution (5120 × 2160) in a 21;9 aspect ratio, watching this TV is almost better than reality. Packed with every bit of Samsung’s latest display technologies, this is a display that needs to be seen to be believed (stop by our store in Glenview and you can see it!).

Of course, this is just a small selection of our entire inventory of flat panel TVs. With 150 different models to choose from, you’ll find the right TV for your home. Shop the best LED TVs at Abt and have a football party worth of a championship.