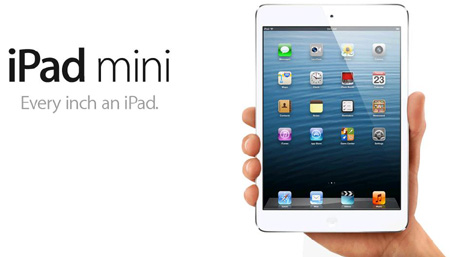 New iPad: Apple announced a 4th generation iPad at it’s event in San Jose, California today. It’s essentially a hardware refresh for Apple’s 3rd gen tablet, as it packs a new A6X processor, dual-band 802.11 a/b/g/n WiFi, a 720p Facetime camera round front and the new image processor found in the iPhone 5.  It also gets the reversible Lightning port that debuted on on the iPhone 5, and will be available in both black and white.

iPad Mini: The 1,024 x 768 resolution is the same as the iPad 2.  Given the specs and price, this is definitely to be the newest entry-level for Apple tablets.  Even though it has a smaller screen, Apps should work just fine as they did on  bigger screen. It is going to be 7.2mm thick, weighing .68 pounds device has been manufactured with an “all new” process that gives it the same anodized edges as you’ll find on the iPhone 5.

Since it is considered entry-level, don’t expect a huge powerhouse performance.  They stocked it with the Apple A5 Chip which everyone is already familiar with.  This looks like a good choice for those who haven’t entered the tablet market and are just getting started.

Next Generation iMac: The new iMac gets super sleek with a slim design.  Measuring at just 5mm thick the screen sizes remain the same and include both a 21.5-inch, 1080p model and a 27-inch, 2,560 x 1,400 model.  To the dismay of Apple fans, they do not come in retina display. They share 720p-capable front cameras with dual mics as well as NVIDIA’s GeForce 600-era graphics, up to 32GB of RAM and a variety of possible storage options, topping out at 3TB.

Check back with Abt.com to see the latest news from Apple and when you can buy all the above goodies.

Where, oh where, has my anything gone?
Apple Event Today!
iMacipad mininew ipad
0 Comments
By Pete R