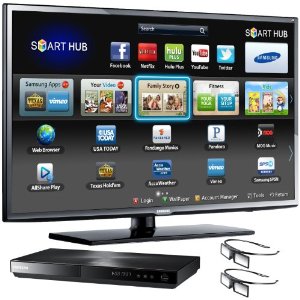 Dad has been your personal chauffeur, your coach, personal bank, super hero, and probably held a hundred other titles—all for what? To help you succeed and be the confident, smart (duh! you’re reading this blog!) individual you are today. While we don’t always thank the old man as much as we should, show him you really mean it by giving him a  gift for Father’s Day that will definitively make up for the time you lost his Babe Ruth ball over Mr. Mertle’s fence.

No, it’s not a Tron Motorcycle  or a the Ultimate John Wayne Collection (although both of those are totally manly and awesome) –  it’s way better.  We’re talking about Abt’s Father’s Day 46″ and 55″ 3D Bundles from Samsung for $1079 and $1499, respectively.  The bundle includes your choice of Samsung Series 6 LED Flat Panel 3D HDTV (46″ or 55″), a Samsung BDE5900 3D Blu-ray Player, and two pairs of Samsung 3D Glasses.

Dad can enjoy all of his favorite movies, sports, and tv shows because both the TV, and included Blu-ray player, have built-in WiFi giving him access to all his favorite streaming content in full 1080p. He can browse the web, share photos, and brag about how awesome his kids are on Facebook and Twitter without having to relinquish his favorite recliner. Dolby Digital Plus, and SRS TheaterSound HD will provide the perfect cinematic sound while he watches Sherlock Holmes, or will put him court-side to watch the Thunder destroy the Heat in the upcoming NBA Finals.

The best part of the whole deal is when you get to teach him how to use it. He’s taught you how to ride a bike, and how to play ball – so return the favor and show him how to take advantage of the many things he can do with a smart TV.