After existing at a comfortable 9.7-inch size since its debut and venturing into smaller territory with Mini versions, the iPad finally got big today. The iPad Pro is Apple’s answer to the Microsoft Surface Pro, Samsung Galaxy Note Pro, and other large-format tablets that have been making their way into enterprise roles in recent years. As tablets have begun to replace laptops as legitimate business tools, the Apple iPad Pro looks to take advantage of that market segment.

Obviously, the major news is that the iPad Pro is big. At 12.9-inches, it’s over 3 inches larger than the iPad Air, and slightly larger than the aforementioned competitors. And that screen is packed with pixels. At 2732×2048, it has the most pixels of any iOS device, ever. It shares the same 4×3 aspect ratio as the iPad Air, but pixel-wise, it’s as wide as the Air is tall. Needless to say, a display of that size has multiple benefits, and the iPad Pro aims to leverage them all. 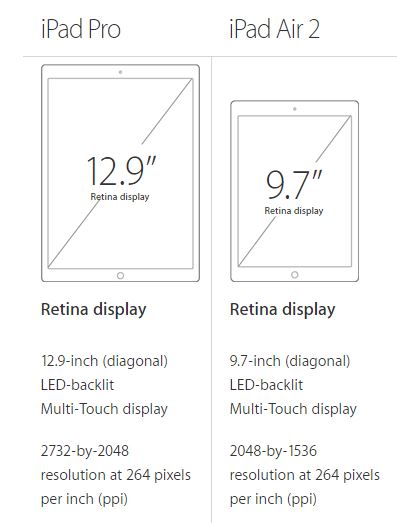 How the new iPad Pro stacks up, size-wise.

One of the new features of iOS 9 is the ability to multitask, running two apps side-by-side. The nearly 13 inches of screen real estate should make that an enjoyable task, with each half of the iPad Pro nearly as large as a full-screen view on the iPad Air.

If you’re worried about using the iPad as a serious business tool, Apple’s beefed up the internals to keep up with ultrabooks and other business-oriented tablets. The new A9x processor is nearly twice as fast as the chip in the iPad Air and offers double the graphics performance, and, according to Apple, is speedier than “80 percent of portable PCs” that were sold in the last year. Apple is promising the ability to do big things with their big iPad, like editing 4K video (the Pro can play three simultaneous 4K video streams in iMovie) or rendering in AutoCAD 360. Even while offering professional power, the iPad Pro offers up to 10 hours of battery life.

To take full advantage of the iPad Pro’s serious performance, Apple also introduced a couple of accessories that will complement the device. The Smart Keyboard is a combination keyboard/stand/folio cover that offers a full-size typing surface. A new construction process allowed Apple to create a keyboard that is extremely durable, does not require an external power source, and connects seamlessly to the iPad Pro. While just 4 mm thin, it’s designed to offer the satisfying key feel of a traditional keyboard. It’s also resistant to water and stains. 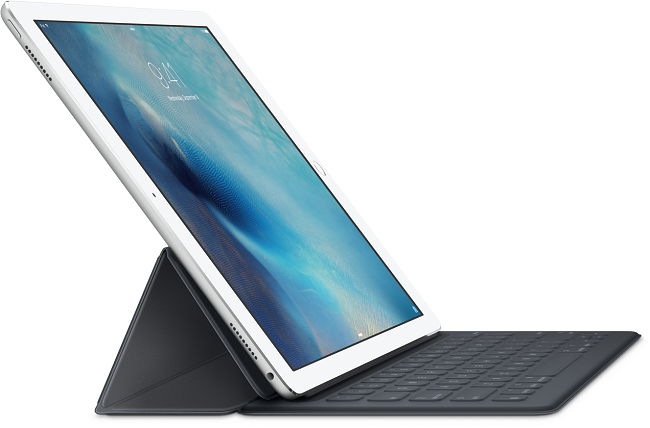 Apple’s Smart Keyboard replicates the size and feel of a traditional keyboard, and doubles as a stand and folio cover for the iPad Pro.

The Apple Pencil gives iPad Pro users a new way to interact with their tablet with greater precision. Perfect for drawing fine lines or hand-writing notes, the Pencil has functions beyond that of just a stylus. Because it is both pressure and tilt-sensitive, the Apple Pencil interfaces with the Pro much like a full-fledged digitizer tablet that a graphic artist or photo retoucher might use. This will give users the ability to create lines of varying thickness and orientation, creating a more accurate digital pen and paintbrush experience. The iPad Pro can distinguish between when fingers or the Pencil are being used, and reacts to track the Pencil twice as fast, for responsive, virtually lag-free use. A full charge (via Thunderbolt port) gives users 12 hours of  use, but plug it in for just 15 seconds to get another 30 minutes of battery life. 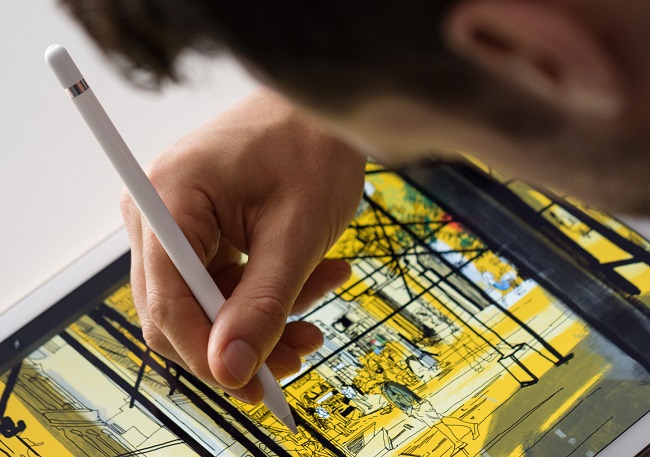 As you might imagine, the big size and big functions of the iPad Pro will command a bigger price. Base model iPad Pro—Wi-Fi-only with 32 GB of memory—will retail for $799, while the top-tier, LTE-equipped 128GB model will be priced at $1079. No specific release date has been confirmed, but expect the iPad Pro to be available in November.