The i’m Watch puts the power of an Android smartphone right on your wrist.

CES 2013— So far, a recurring theme to products at CES 2013 has been “bigger is better.” Larger TVs, higher megapixel cameras, smartphones that approach tablet size; we are consuming higher-quality media and more of it than ever, so the trend makes sense. However, one of the gadgets we’ve seen so far that really set our geek hearts aflutter took the opposite approach: the i’m Watch, an Android-based smart watch.

The smart watch is an idea that’s been dreamt about since Dick Tracy’s 2-Way Radio Watch first debuted in 1946. The i’m Watch is one of the best implementations of that concept that we’ve seen yet. It runs a custom version of Android called “i’m Droid 2,” which its creators claim is “the world’s most advanced smartwatch operating system.” A variety of custom apps are available, including Facebook, Twitter, and a music service.

By tethering to your phone via Bluetooth, the i’m Watch eliminates the need to include cellular radios or a SIM card in its body, hosting just the dialer and contact list locally. This “Smart Tethering” system connects to your phone only when necessary, with the phone relying on Wi-Fi connects whenever available.

Sporting a 1.54″ color TFT display with a 240×240 resolution, in a 10mm thick case measuring 40mm X 53mm, the i’m Watch is large enough to offer practical functions, without being annoyingly bulky. A 450 mAh Li-Po battery powers the IMX223 CPU, allowing for a claimed 48 hours of standby without Bluetooth connection, and up to 24 hours when connected. You’ll be able to get up to 3 hours of talk time out of the i’m Watch. 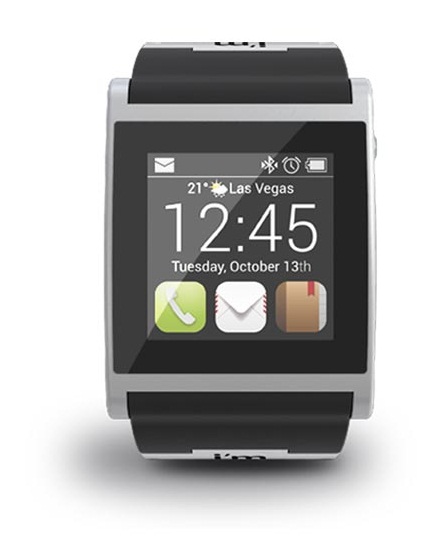 All of the functionality of an Android smart phone, right on your wrist.

There are few other things stuffed into the relatively svelte body, including an accelerometer and speaker phone. The accelerometer provides one of functions we really got a kick out of: to hang up or ignore a phone call, simply shake your wrist. While there is no integrated camera, the i’mages App turns your watch into mini monitor through which you can compose images and control you camera.

Overall, we’re very excited about the i’m Watch, which we think nearly perfects the smart watch concept. It is currently available for purchase through the company’s website.