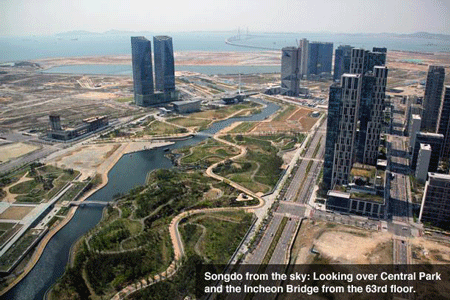 Technology is meant to enhance our quality of life.  Technological advances can simplify tasks, make work easier, and allow us access to the wealth of information on this planet.  Adoption of the latest and greatest has always been an issue with fears of privacy invasion, reliance, and the eventual submission of mankind to our robot invaders, lurking in many skeptical minds. At Abt, each and every one of our products is chosen for our shelves based on the fact that they’ll have a positive impact on the everyday lives of our customers – not gimmick or novelty. That’s why when we came across this $35 billion city full of techy greatness, we had to share.

Songdo is 100 million sq. ft. city on 1,500 acres in the northwest corner of South Korea that represents the (hopeful) future of urban development. The co-venture of Gale International and architectural firm Kohn Pederson Fox , Songdo isn’t the first city of its kind, but represents the newest attempt at a smart city,  and will eventually hold 65,000 residents and accommodate another 300,000 daily commuters. Oh yeah, it’s being built completely from scratch too.

Last spring, Cisco became the sole supplier of “digital plumbing” for the city and began installing screens and sensors everywhere. Each apartment will be completely automated from room temperature to lighting and will be remotely controlled via a smartphone or another connected device. Apartments and corporate buildings will also be equipped with Cisco’s HD teleconferencing equipment for access to concierge services and more.  The city features a vacuum-powered garbage removal system that will either be a massive success or epic failure – nothing in between.  For more on the technology in Songdo, check out this article by ReadWriteWeb. 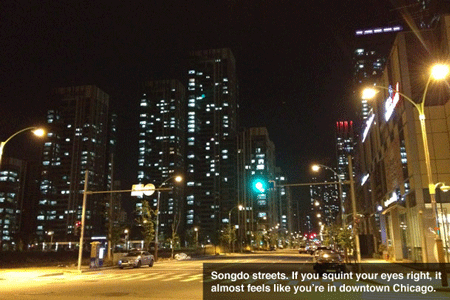 What’s most impressive about the city is the adaption of the new urbanism development style.  New urbanism is an urban design movement which promotes walkable neighborhoods containing a range of housing and job types. It arose in the United States in the early 1980s and has gradually reformed many aspects of real estate development, urban planning, and municipal land-use strategies [Wiki]. Basically, new urbanism creates cities for humans. The focus is on creating living environments that sustain life and resources, so nature and mankind can coexist without the polarizing lifestyle adaptions that accompany similar communities.  Take an environmentally-conscious and socially responsible community and toss in the bits of technological innovation that foster things like cleaner water and increased energy efficiency.

In the Songdo International Business District (it’s actually part of “Greater Songdo” and governed by Incheon) is no more than a 15-minute walk – ergo less urban pollution. The city also has three separate water networks. One for freshwater, one for sewage, and one for “grey water” that’s used for irrigation among other things. Sensors are literally everywhere. They monitor everything from water flow to energy consumption and traffic. These 21st-century implementations help create a sustainable new urbanism lifestyle and adapt it for the future. Another advancement designed to bolster sustainability is that the heat produced by the city’s natural gas power source is re-purposed (in the form of hot water) to heat buildings and power absorption chillers for cooling.

Songdo isn’t the only new urbanism city coming to life these days either.  This Forbes article describes the district of Belmar in the city of Lakewood, CO. The Belmar downtown district was built out of a decaying shopping mall and is designed with the pedestrian at heart.

Both these cities represent a promising future in an already overcrowded world. We are going to need more cities, but developing the way we once did isn’t going to help anyone in the long run.

For more information on the city of Songdo and new urbanism, take a look at any of these places:

Cities as Gadgets: 8 Features This Brand New City Has That Yours Doesn’t [Fast Company]

Olympics Embrace High-tech Gadgetry
What length of HDMI cable should you get?
0 Comments
By Pete R