Tesla Model S Info Console: Abt Checks It Out

CES 2013—The life of a copywriter is far from glamorous; as someone who drives an 18 year-old station wagon with alignment issues and a rusty muffler, I get excited when I ride in a car with a CD player. Needless to say, when I saw this video of the Tesla Model S interactive center console, I was more than impressed. Nvidia had a Model S parked at their CES booth, since the display runs on their Tegra 3 mobile processor. Our very own tech-head, Josh, spent some time inside it, where he got a run-down on the screen’s capabilities.

Spanning the entire height of the console and giving access to pretty much every controllable parameter in the entire car, the 17″ touchscreen panel is both the technological and visual center of the interior. All of the typical controls are there, like temperature and radio volume, as well as door locks and lights. Swipe your finger a certain length, and the panoramic roof opens a corresponding amount. But the Tesla’s best trick is its built-in 3G connectivity, making the console a portal to The Cloud. Google Maps and Slacker Radio integration negate the need for auxiliary GPS or music devices. The tall aspect ratio allows stacking of windows, letting you view a navigation screen along with your music source and climate controls. 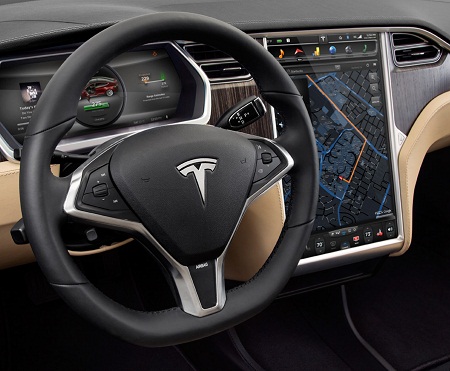 The center console of the Tesla Model S: Where art and technology meet.

The Tesla Model S is, itself, a technological marvel. This console is just the proverbial icing on the cake. It acts to genuinely enhance the car both functionally and visually, in an era when other automakers are including poorly-implemented displays just follow a trend. I am a little concerned about the Tesla drivers giving in to distraction while driving, what with a full-size computer mounted in their field of vision. Of course, I’d love to get behind the wheel of one myself. Maybe in 18 years.