Technology at Coachella Brings Rapper Tupac Back To Life

Chances are, you’ve heard of the news coming from this weekend’s music festival Coachella: Tupac Shakur is back. The famous rapper who passed away in 1996 isn’t exactly back from the dead in flesh and blood, but rather in electronics and lights. On April 15, a “hologram” of Tupac Shakur (technically a 2-D video projection) performed his songs “Hail Mary” and “2 of Amerikaz Most Wanted” with Snoop Dogg at the Coachella Music Festival.

The video footage was created by visual effects company Digital Domain.  You may not know the company’s name, but you most likely know their work.  Digital Domain is the company behind the computer-generated imagery that transformed Brad Pitt in “The Curious Case of Benjamin Button.” The company’s artists also won an Academy Award for the blockbuster film “Titanic.”  The Wall Street Journal reported Dr. Dre and Snoop Dogg were in talks of a possible tour involving the two rappers and the hologram version of Tupac.

Technology has been advancing incredibly when it comes to cinema special effects.  Do you think this will be a successful tour?  Who would you love to see perform on stage in hologram form? 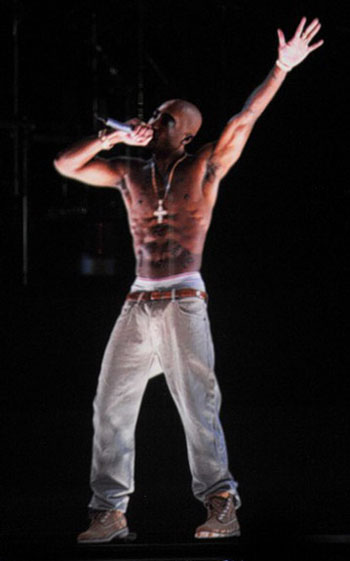