One of the most touted iPhone 5s improvements Apple discussed was its amazing new camera.  The new 64-bit A7 brain behind the camera and dual LED smart flash are a first of their kind.  They stressed the importance of the camera’s new 15% larger image sensor & increased f/2.2 Aperture.  It’s these core elements that significantly affect the quality of a smart phones image.  I took a look at the many phone cameras out there and compiled some info. Compare Apple’s new iPhone 5S to the HTC One (one of the best camera phones made) that came out 6 months ago. HTC has not only a higher max aperture but already features the same size image sensor and even adds optical image stabilization. Nokia’s Lumia 1020 not only has an insane 41MP camera, but it’s image sensor is double the iPhone 5S! It’s very clear that these Apple improvements to the camera are significant compared to previous iPhone models. Although, it’s also clear that compared to the industry, this technology is already getting stale. 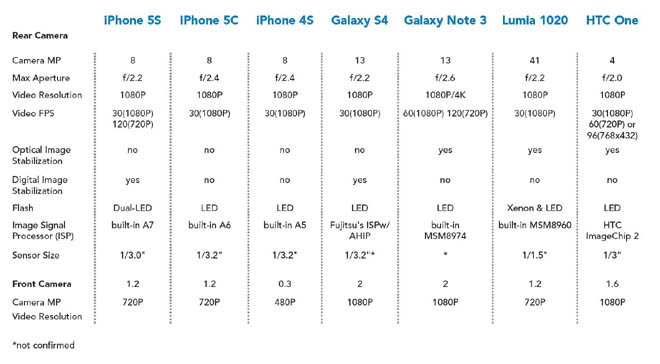 Now, that’s all specs on paper.  How is this camera really going to perform?  The answer is:  You are going to absolutely love the camera on the new iPhone 5S.  The amazingly redesigned iOS 7 is going to team up with the muscular A7 processor and show the world that there’s much more than specs.   Despite my enthusiasm, there are better smartphone cameras now and will be later this year.  An iPhone user like myself really doesn’t care though.  iOS 7 is the key to the castle.  Until other phone manufacturers can offer you their smartphone running iOS 7, most of us iPhone users will continue to throw high fives with each and every new iPhone launch.

Besides a 15% larger image sensor, increased f/2.2 Aperture & 64-bit A7 processing madness, we’ll have this grocery list of improvements to look forward to.

Slow-motion video:  This is #1 for me. Slow motion is the absolute best.  The ability to select a section of your video and apply the slow motion effect is very exciting to me.

Continuous burst mode:  10 photos per second? Real-time analysis that suggests what shot(s) look the best for you?  Pretty sure the A7 processor features a microscopic cockpit with a super robot sitting at the helm to aid in this automated decision making process.

True Tone flash:  Probably one of the most impressive features.  Low light pics are going to have such great color.  I’m very impressed with how the A7 will figure out the balance of each color flash used so quickly.  Most likely, that lil’ robot is pretty smart and has a say in this too.

Panorama photos:  Loved this feature in iOS 6 and loved it more in iOS 7 beta.  However, it’s always had its quirks.  Once again I think we owe thanks to the A7’s increased speed and better graphics to help us use our iPhone 5S stunning panorama feature (with auto exposure!) Well done Apple.

Auto image stabilization:  Yes, I wish the word “optical” was present here.  However, software has come a long way.  This new feature from Apple actually takes 4 images with a short exposure time and magically combines them into one.  This is designed to reduce noise, subject motion and when your hand shook a bit when you’re taking a picture.

Square photos:  I will never use this.  Hope you enjoy it you tweeters, instagrammies and Facebookians

Photo filters: Also not crazy about this.  3rd party apps have provided this for years.  For those of you wanting to get instantly creative, have at it.

HD video recording:  We’ve had this now since iPhone 4S.  New flagship phones from other guys will feature 4K Ultra HD recording but that’s still going to be tricky with file sizes, battery life, monitors that can display it, etc…  1080P is fantastic and it’s worth mentioning that the iPhones audio recording while taking your 1080p video is superb.

New Camera App:  I’ve been using this in iOS7 Beta on an iPhone 5 all I have to say is one thing:  Speed! It’s super fast even with HDR on

New Photos App:  Nice sharing features, like AirDrop incorporated here.  Otherwise, just love its speed as you play around in there.

iPhoto Sharing:  Have you setup any shared photo streams from your friends yet? Have you shared your own photo streams yet?  Check it out since you’re allowed 1000 photos to sit in your shared stream for free (with your free icloud account)  The absolute best way to share photos