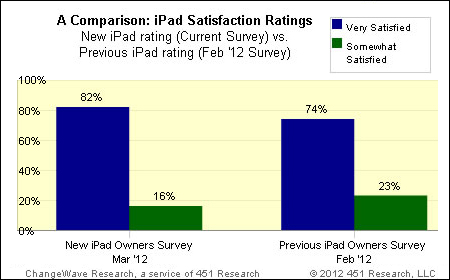 A recent survey conducted by ChangeWave Research revealed the true feelings of iPad owners of all kinds. 82 percent of new iPad users said they were very satisfied with their new toy, while the remaining 12 percent were just somewhat satisfied, and none claimed complete dissatisfaction. The survey also revealed that the new high-resolution display topped the list of favorite features, and the high cost of the tablet was the most disliked feature.

So 82 percent of new users were very satisfied? I guess I would be very satisfied too with my shiny new tablet without having any experience with previous models. Honestly, if we valued these statistics across all markets the phrase “Best Hotdog in Chicago” would simply be a measure of how many hotdog virgins you could pack into one room.

The number we, as critical consumers of technology, should concern ourselves with is the amount of very satisfied returning users. These users know every inch, feature, and function of the iPad and qualify as informed analysts. 74 percent of returning users self-identified as very satisfied meaning, despite bad WiFi connection and overheating rumors; consumers still feel that their new iPad is an improvement on the previous iPad 2 model.

What do you think? As consumers we have the most powerful voice in the conversation. What features really stand out to you and which do you really want to say in future models. Get creative, this product fiends for a little innovation and maybe one of you can spark it.

Bosch Giveaway at Abt!
The (Scary) Future of Gaming
Applenew ipad
0 Comments
By Pete R