Summer Cools Off, Apple Heats Up 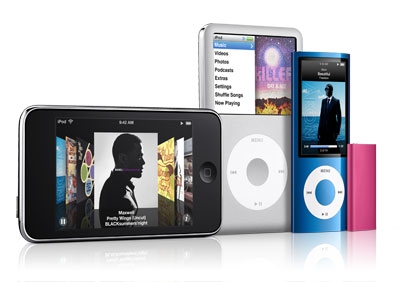 Apple’s new iPods are out today and if you have been watching or reading about them you know Touch has new features, and so does Nano, Classic, and Shuffle too.

Selling over 20 million, iPod Touch is Apple’s fastest growing product… New to the third generation Touch, Ubisoft is developing games specifically for the iPod. Apple dropped the price on the 8GB model, speculated to be around $229 to $199, it will be the most affordable access to the App. store. iPod Touch is priced at $199 for the 8GB, $299 for the 32GB, and $399 for the 64 GB. Touch is now equipped with OpenGL|ES 2.0—just like the iPhone 3GS.

iPod Classic and Shuffle only had a few upgrades, The Classic went from 120 to 160 GB, remaining at the same price–$249. Shuffle introduced five new colors and third-party head phones with the controls right on them.

The iPod Nano might have stolen the show today with the most improvements. Nano now has a digital video camera, (comparable to a Flip video camera) with a microphone. It also added an FM radio, and Genius mixes. Nano’s display grew from 1.8” to 2.2” and there is a built-in pedometer for Nike +. The 8GB is $149 and the 16GB is $179.