Star Wars not to be released in 3D…Yet

Star Wars’ Journey to theaters in 3D, put on hold. 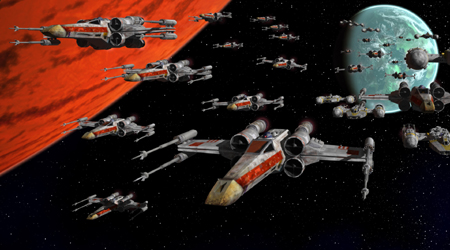 A long time ago in a galaxy far far away, or maybe just Hollywood a few days ago, there were rumblings of releasing the original classic Star Wars Trilogy in 3D.  Those plans however have been scrapped, for the time being.

With Writer/Director J.J. Abrams officially taking helm over the new Star Wars movies, Disney (remember, Disney owns Lucasfilm now) released a statement saying, “”Given the recent development that we are moving forward with a new Star Wars trilogy, we will now focus 100 percent of our efforts on ‘Star Wars: Episode VII’ in order to ensure the best possible experience for our fans.” Disney also stated, “We will post further information about our 3D release plans at a later date.”

So, unfortunately it’s going to be some time before you feel like reaching out to hug an Ewok or dodging a laser blast from an AT-AT Walker.  A bit of a disappointment for Star Wars aficionados everywhere, but the thought of new Star Wars movies being created helmed by a new voice and vision, softens the blow.

For now, look foward to a new Star Wars: Episode VII, which is still tentatively scheduled for a possible release in 2015.