Summer is here, products from January’s CES 2012 are slowly hitting the market and the Electronic Entertainment Expo is just around the corner.  Technology is changing faster and faster with each passing day.  Some of the creative technological wonders that were once a dream are now becoming a reality.

Case in point: over 20 years ago the popular TV Show Star Trek: the Next Generation introduced a wonderful, new technology to both the crew of the USS Enterprise and millions of viewers.  It was a hand-held electronic device that responded to users via touchscreen.  Called a “Personal Access Display Device” or, “PADD” for short (see where I’m going with this?) crew members can check status reports, take notes, and even give themselves reminders. 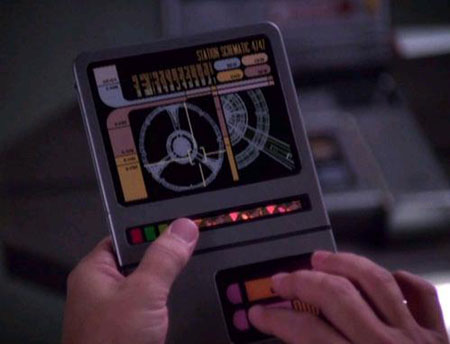 PADD in Star Trek: The Next Generation/Deep Space 9

Since the release of Apple’s iPad (no relation to PADD) Star Trek fans have been giddy with the similarities, many hoping space exploration is just around the corner.  In recognition of the similarities, the iPad and Star Trek’s PADD have, the Apple store now has a Star Trek: PADD application turning your iPad into what the PADD looked like on Star Trek.  Unfortunately, no warp speed yet.

Who would have thought 20 years ago that a fictional, super-advanced technology in the world of sci-fi would become an everyday item for consumers today?  What items in the history of sci-fi would you like to see a reality?