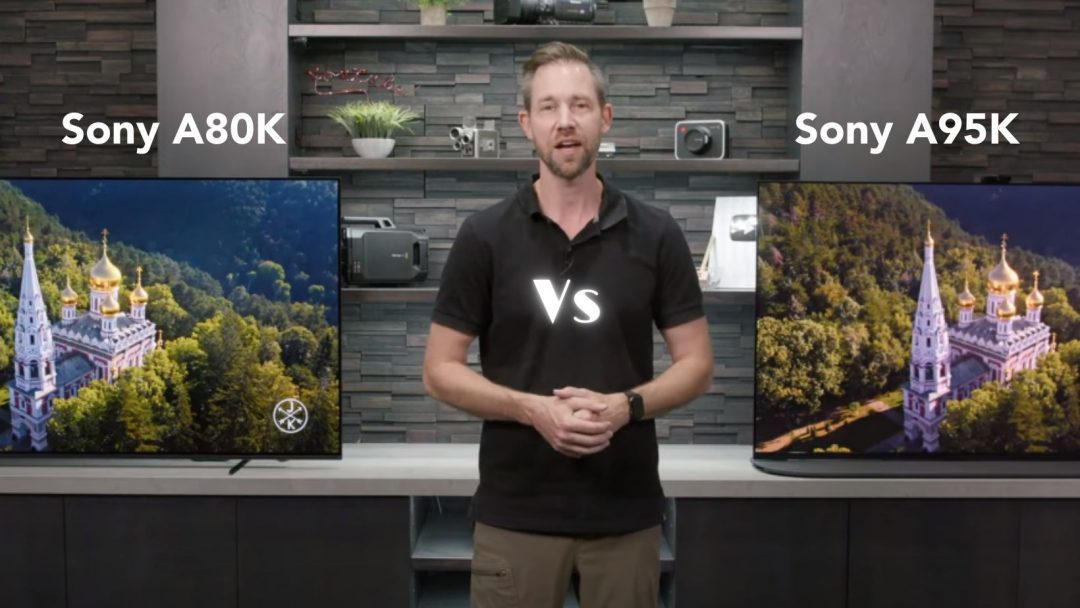 Those who keep a close eye on our YouTube channel might see a familiar clip below.  One of our resident TV experts and on-camera star Carl dissects the difference between two of Sony’s top-tier 2022 TVs, the A80K OLED and the A95K QD-OLED. These televisions are neck-and-neck when it comes to tons of key specs, making it hard for buyers to choose between the two. Watch the video below as we map out the key details between the two screens, their technologies and more.

The Sony A80K is one of 2022’s most bang-for-your-buck televisions. The OLED screen envelops you in color volume with deep blacks and vibrant brights. The brights are only made whiter with help from the brand’s XR OLED Contrast Pro. This 4K TV features the Cognitive Processor XR to boost quality of the content you watch in real time, too. Other key features include the Google TV operating system, high-performance gaming mode, blur-reducing technology and more. At first glance, this television is the perfect upgrade for anyone looking to finally upgrade their screen from an older HD version.

The Sony A95K is a different beast altogether. It’s part of the brand’s Master Series. Each screen is hand-picked to meet the brand’s strict standards and calibrated perfectly, all so that every scene looks exactly the way a cinematic director would imagine. Meanwhile, the QD-OLED display functions with a completely different technology than its predecessors, which we’ll dive into more below. Key features include an expanded palette of colors for every scene along with double the brightness available to most OLED screens.

While the screens on the Sony A95K and A80K might be hard to differentiate in this video, the Sony A95K is a member of Sony’s exclusive Master Series. That’s a bump up already thanks to its professionally, individually chosen panel. But its perfected calibration ensures that every setting is tweaked perfectly to showcase content the way a creator would want it seen.

Bang For Your Buck: Sony A80K

While the Sony A95K is a member of the Master Series, that tagline may not matter to the average individual looking for a new television. Whether you’re hoping to entertain the family, create your own gamer cave or craft the perfect entertainment space, features like 4K entertainment and upgraded OLED lighting are a necessity. The Cognitive Processor XR and Google TV OS make seeing films and shows seamless and allows content to be upgraded as you watch. This tech (and much more, from game-enhancing modes to minimalist design all bring) all comes at a significant price cut, too, making this a good choice if you’re solely deciding based on budgetary restrictions.

When it comes to adding and adjusting television accessories, the options are the same but the application looks different. The A95K comes with the BRAVIA cam attached and ready to go. This camera can tell exactly where you’re sitting in the room and adjusts audio and visuals to best fit where you’re sitting. While you can purchase the same camera for your A80K, it does not come included.

Let’s take a look at one of the other crucial elements to today’s entertainment: the audio. In today’s world, that often looks like a powerful soundbar. The A80K’s stand is optimized to lift off of your table or entertainment center with a few inches of space between the bottom of the screen and the surface of your furniture. That’s the perfect amount of room to place a soundbar to better boost your listening experience (after all, thinner televisions means less room for built-in speakers). Meanwhile, the A95K’s unusual stand is built a little differently. This stand goes all the way down to the bottom of wherever it’s placed, with an angled form that can face forward or backward. While that immersive viewing experience is exciting, it leaves no space for a soundbar. You’d either have to mount a soundbar, place it on a shelf in an entertainment center or opt for a home theater system with multiple speakers.

With these two televisions, it’s a battle between two technologies: OLED and QD-OLED. OLED (found in the A80K) technology has been a longtime player in the game of next-gen televisions, with organic light-emitting diodes lighting up individually to create an almost unlimited depth of color. And since there’s no bright LCD screen hiding behind these lights, you’re able to see darker blacks than ever before. Meanwhile, QD-OLED (found in the A95K) technology kicks the standard up even higher: here, a full layer of quantum dots (that make QLED TVs special) deliver brightness never before seen in OLED models. Previously, it was a choice between brighter whites and darker blacks when choosing a QLED or OLED TV. With the A95K, the best of two worlds collide for a brighter screen, extreme color depth and deep blacks that have never before lived together in one device.

When it comes to screen quality, the Sony A95K pushes through with help from its QD-OLED technology and its status as a Master Series Sony television. It’s perfectly calibrated, artistically colored and designed for supremity. However, it’s not without flaw. The lack of space for a soundbar isn’t a small detractor, but it makes up for that issue with a truly expansive picture. That being said, the A80K isn’t far behind. It comes with nearly all the core technology found within the A95K, from the Cognitive Processor XR to the seamless Google TV operating system.  If you’re willing to go for a slightly lower-quality screen, then the A80K is a better match for you—you’ll save over a thousand dollars. It all depends on what matters more for you.

If you’re still on the fence, head to the experts. Our team of television specialists can help with tailored advice that meets your needs.

Give us a call at 847-954-4100 and we’ll be happy to help you choose your next-level screen.
Abt's Guide to Tailgating Ideas
Employee Spotlight! Rigo & Rey Mora
SonyTV
1 Comment
By Sean Ryan