Sharp 8K TV: This One Goes To Eleven

The king is dead, long live the king.

And just like that, 4K has been made obsolete as quickly as it debuted. Okay, not really. 4K TVs are still the ultimate in image quality available to consumers, but at CES 2013, we got a glimpse of Sharp’s 85-inch 8K TV. Yep, 8K.  That’s double the detail of a 4K set, right? Actually, since resolution is measured on two axes, 8K TVs have 4 times the detail of 4K sets, and 16 times that of normal HDTVs. With a  7,680×4,320 resolution, the picture is equivalent to having been taken with a 33-Megapixel camera. 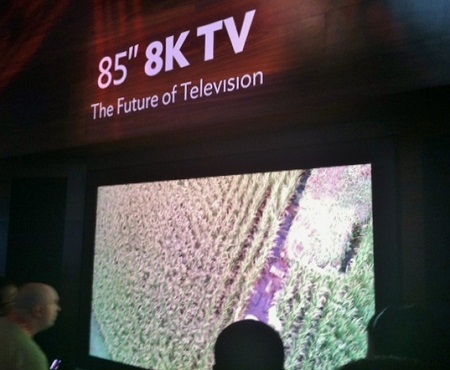 Needless to say, it’s hard to describe the sensation of watching 8K footage. Our 4K TVs already blur the line between video and reality, and 8K sets expand that detail in a way that’s impossible to relay via words or photos. At normal viewing distances, pixels are imperceptible, and even up close we had to struggle to see them. It’s been said that “8K is the maximum the human eye can understand,” and watching it is almost like looking at real life, only better.

The 8K standard, also known as “Super Hi-Vision,” was developed in conjunction with NHK, Japan’s national broadcasting organization. In addition to the mind-boggling visual specifications, Super Hi-Vision also includes an insane 22.2 audio-channel component. If it seems like companies are just throwing out larger and larger numbers to best each other, here’s a diagram from NHK that details the 22.2 channel setup: 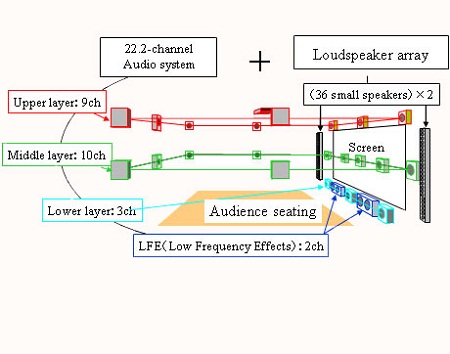 Obviously, content is currently close to nonexistent. You’ll need a fellowship of medieval warriors to track down a camera capable of filming it, and forget about trying to store or transfer it with any consumer-level technology. The BBC did film parts of the 2012 Olympics in 8K, but the only way to have viewed the footage was in a specialized theater set up in London just for that purpose. Reps from Sharp say their 8K TV probably won’t be available to purchase for another four or five years, so if you’re looking for the best picture possible, it’s still going to be on one of the few readily-available 4K sets.