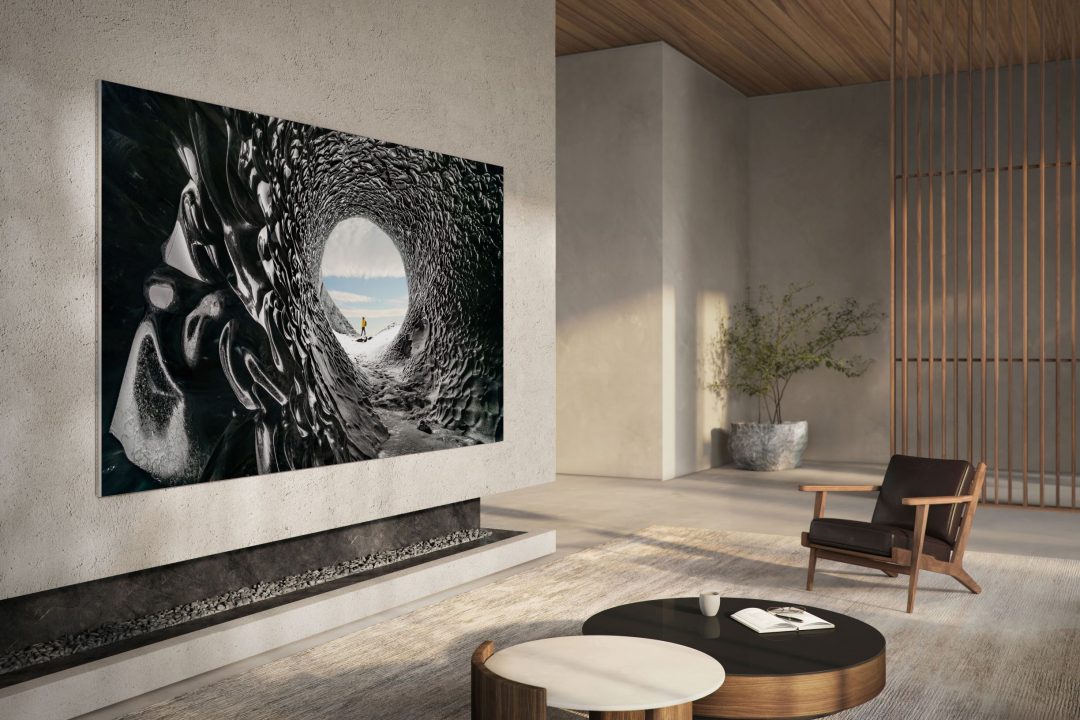 While advancements in OLED technology were headline news for the other big two TV brands, Samsung—who has never offered a display of that type—doubled down on their own MicroLED TV products. Samsung’s MicroLED TV uses an alternative display technology that promises the best traits of both OLED and LED TVs while avoiding the negatives of either. The technology may eventually totally replace Samsung’s QLED TV lineup.

On an LED TV, each pixel—responsible for color—lives on a translucent panel that is backlit by a set of small LED (Light Emitting Diode) bulbs that are arranged in zones. The lights can be turned on and off per zone, to match areas of brightness on the screen. But an LED backlight zone will always be much larger than each pixel, meaning that there will often be some light bleed that causes dark areas to never be truly black.

But on an OLED (Organic Light Emitting Diode) TV, each individual pixel creates color and light. Because of this, each pixel can be turned completely off, which is what gives an OLED TV its impressive contrast ratio and the ability to recreate perfect blacks.

The major downside to OLEDs is that the organic material used in each pixel has a lifespan that is finite and much shorter than an LED. This can lead to a drop in brightness levels over time, or the dreaded “screen burn-in,” a phenomenon wherein the ghosted image of common on-screen elements (video game menu bars, stock tickers, etc) can become permanently etched onto the screen. OLED TVs also cannot achieve the same peak level of brightness as LED TVs, leading to poorer HDR performance.

And this is where MicroLED comes in. A MicroLED TV uses tiny LED bulbs, each small enough to light only a single pixel. It’s the same concept as an OLED TV, meaning that each pixel can be fully lit or completely off. But with no organic material, Samsung’s MicroLED TV doesn’t suffer from the same potential for burn-in that plagues OLED TVs. And each MicroLED can get brighter than the average OLED pixel.

So, Samsung’s MicroLED TV will be able to produce the impeccable contrast expected from an OLED TV, while putting out the brightness usually only available on a high-end LED TV. There will be no better way to view 4K HDR content than on a MicroLED TV, and they will also be the ideal solution for those who want to experience a projector-sized screen in a room with visible ambient light. Other impressive features include: 100% coverage of DCI and Adobe RGB color gamuts; a completely bezel-free design; and Multi-View, which lets users hook up for unique video sources and watch them simultaneously in a grid.

The Samsung MicroLED TV isn’t a brand-new concept; we’ve seen and been wowed by it at CES in years past. Just a few years ago, it was purely a conceptual product, but last year Samsung began its potential use in commercial installations and teased availability for consumers. The worldwide pandemic no doubt put a damper on those plans, as most tech brands suffered massive production slowdowns.

But this year, Samsung’s MicroLED should finally be available for consumers to purchase. Of course, just because you can buy something, doesn’t mean you can buy it. As with all cutting-edge technologies, the Samsung MicroLED TVs will carry an astronomical price tag.

According to ZDNet, the 110-inch version of Samsung’s MicroLED TV is expected to cost the equivalent of around $156,000 when it goes on sale in South Korea this year. Samsung has plans for 99- and 88-inch versions of their MicroLED TV, but don’t expect to save much by moving down in size.

Of course, if you’re not ready to remortgage your house to get a new TV, there are still plenty of Samsung TVs that will make a great foundation to dream your home theater.