CES 2013—When flat panel HDTVs  first started appearing in large sizes, I often joked that I’d like to replace all of the windows in my house with them, so I could see whatever scene I’d like outside. No more cloudy, rainy days or long winter nights. While modern 4K TVs can create a scene almost indistinguishable from real life, the obvious problem with my harebrained scheme was that occasionally, I would like to see outside. We found a solution to that problem last year, with the Samsung Smart Window, which can display graphics on an otherwise clear screen.

At CES 2013, we saw an interesting and practical implementation of my idea: the smart display case. Samsung equipped a traditional-looking retail display case with a smart window, allowing exhibitors the ability to showcase a product safely under wraps while enhancing the viewer’s experience with additional info via the display. The Samsung smart window display is an effective concept due not just to its practicality, but also its visual brilliance. This is something people stop to look at.

Illuminated rear and bottom panels keep both the items and the information on the smart window itself perfectly viewable at all times. Samsung’s Magicinfo system provides full PC control, so the window can be programmed to display just about any information the user desires: Spec lists, Where to Buy info, QR Codes, etc. It’s only a matter of time before we start seeing some cool augmented-reality implementations. 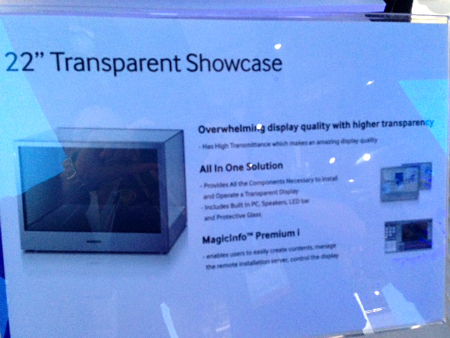 We wouldn’t mind getting our hands on a few of these cases; with a showroom as large as ours, we’ll put them to good use.