Samsung today showed off the Galaxy NX, the newest entry into the Galaxy line of Android devices

With the release of the Galaxy Camera, Samsung showed the world a device that was more camera than phone, as opposed to the typical smartphone with a crippled camera function. The Galaxy Camera was an amalgam of a super-zoom point & shoot camera’s sensor and lens with the brains and display of an Android smartphone. It did everything either device could do on its own (except make phone calls), opening up new ways to take advantage of each half’s strength.

Today, Samsung took their vision one step further with the unveiling of the Samsung Galaxy NX. Instead of a small-sensor point & shoot body, they melded an interchangeable-lens NX-model camera with an oversized smartphone to create one of the most unique multi-use products in recent memory, ushering in a new way to take and share photos and videos.

From the front, the Galaxy NX looks no different than a regular NX-series camera, or any other DSLR camera for that matter. Flip it around, though and that’s where the surprise is. Where you’d normally find a modest-sized LCD screen and smattering of buttons, knobs and levers, is instead a massive 4.8-inch HD display featuring Samsung’s Super Clear LCD technology. Like a smartphone, all settings and functions are controlled through this touchscreen display, so you’ll find not a single additional button on the back face of the Galaxy NX. The top plate holds only a few: A dedicated video button and the shutter release are placed on the grip side, just in front of a command dial. To the right of the viewfinder hump is the power button, and to the left you’ll find the button that raises the built-in flash. 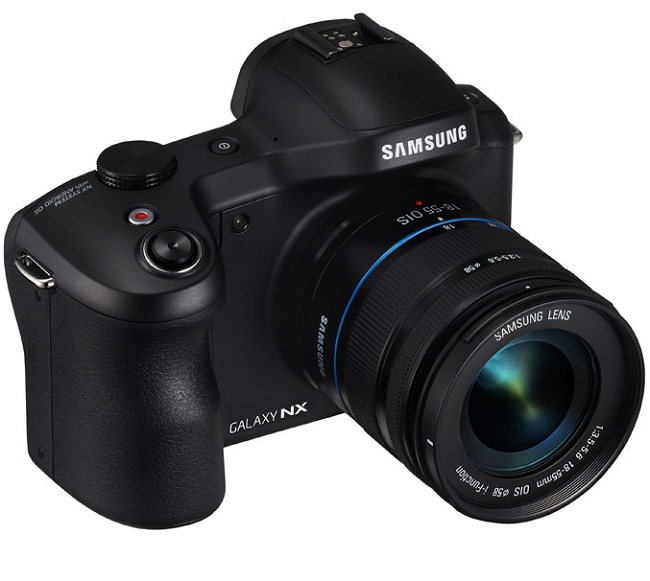 The Samsung Galaxy NX Cameraphone. Phonecamera. Maybe we need a new name for this kind of device…

Inside the Galaxy NX, Samsung fit top-tier components that speak to both halves of this camera chimera’s pedigree. Imaging is handled by a DSLR-Sized APS-C CMOS Sensor, providing image quality that’s equal to many DSLRs and easily trumps any point & shoot camera or smartphone. Hybrid Autofocus gives you fast and accurate focusing, and the existing range of NX-mount lenses opens up a wealth of photographic versatility. The brain of the Galaxy Camera is a Qualcomm quad-core processor, which should provide peppy performance for not only imagining functions, but also for running the Android OS.

The Galaxy NX runs the latest version of the Android OS, Jelly Bean. Between this and the large touchscreen, a whole slew of new creative and multimedia options are opened up to photographers. Because the Galaxy NX runs a full version of Android, any application available in the Google Play store can be installed on it. That includes games, social media apps, photo-editing programs and countless others. The Galaxy NX connects to WiFi, 3G and 4G networks, so you can upload direct to Instagram, Youtube or Dropbox right from your camera. Built-in GPS functionality can lead you to a specific vantage point, then let you geo-tag all photos you take there. All of the Android options are in addition to normal camera functions, like 1/6000 second max shutter speed, RAW format image capture and the ability to shoot Full HD videos. 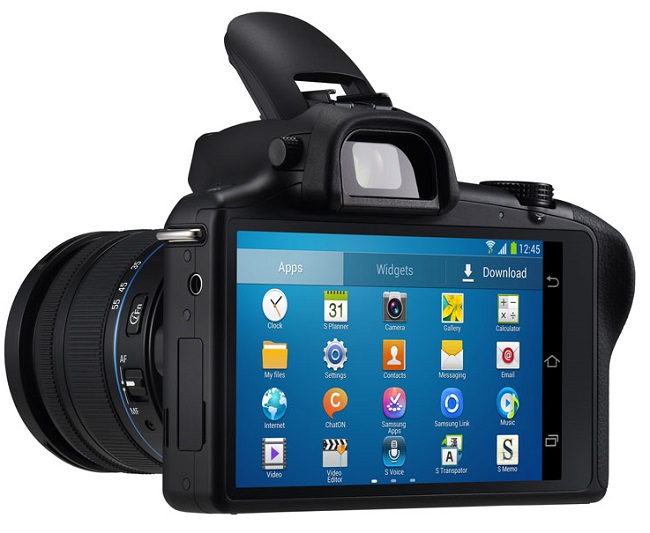 While it can’t natively make phone calls (though calling should be achievable over an internet/data connection with apps like Skype), the Samsung Galaxy NX is capable of everything else you’d expect out of the latest high-end Android smartphone or tablet. Additionally, you’ll have all of the photographic capabilities of a mid-tier interchangeable lens camera. While it may not eliminate the need to carry both a high-quality camera and a phone, the Galaxy NX will make it much easier to edit and share photos on the spot and integrate high quality images into your social media. There’s also plenty of untapped potential, ideas that will manifest themselves from this new, tight integration of imaging and connectivity. And of course, now it’s easier than ever to play Angry Birds while waiting for that perfect photo opportunity to present itself.

No price or availability have yet been announced, but if we get our hands on one we’ll be sure to do a write-up and video review.