Trying furiously to shake out my legs and kick the creaks out from my back, the 9 ½ hour bus ride from Chicago to Memphis wasn’t as bad as I thought.  Sleeping intermittently and finding something to keep myself busy was a fair balance. The Samsung Galaxy was brought out of its box before I headed out and first impressions were made on the ride in.

Initial Encounter: The convenience over a laptop computer is evident immediately when it comes to size and portability.  Lacking a keyboard and numerous moving internal parts, the tablet is thin, light and almost all screen. The back is a textured, silver, durable exterior which is nice to hold in your hands and feels extremely solid when you grasp with one hand.

Worried that something may happen to the screen along the way, my fears were gone when I realized Samsung uses Gorilla Glass for their tough screen. Gorilla Glass is extremely thin, and extremely durable from scrapes, scratches dents and dings, so it was going to be safe in my messenger bag on the trip.

On the ride to Memphis, I found the software extremely easy to use. It’s Android 3.1 Honeycomb, which is on numerous smartphones, including mine, so the learning curve was next to nothing. 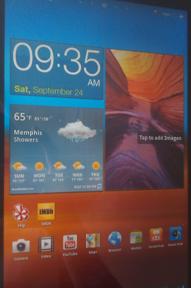 Setting up a Wi-Fi was extremely simple as well.  Locating the availble connections in the lower right of the unit, with a few clicks we were connected to the bus’s Wi-Fi.  I used the Android marketplace to immediately install the Yelp app and a few of my favorite website applications like IMDB to pass time.

One thing Crawford and I noticed was the severe lag from the bus’ Wi-Fi.  Our internet was eventually down in rural America!  Panicking slightly because I never installed games nor do I have access to the internet, Crawford came up with a brilliant idea: 3G.  The Samsung Galaxy, unlike the leviathon of tablets, the iPad, does NOT have 3G built into the unit.  This means the internet can only be accessable via Wi-Fi connection.  Crawford did have 3G on his cell phone.

After tinkering with a few of the settings, his phone eventually became a router for the tablet, connecting online via hotspot through his phone, thus giving us internet accessability once again.   Unfortunately, that is a downfall with a 3G-less tablet, but we made the most of it.

Videos were smooth and so was navigation.  The resolution for HD videos on the internet comes in beautifully through the Galaxy’s screen.  Near portable Blu-ray quality. The bus ride went quicker and Crawford and I were a lot more informaed on hilarious Youtube videos and new internet memes thanks to the tablet.

Up next: Out in the wild-in the streets of Memphis with the tablet.