Before we hit the streets of Memphis, I made sure to do an inventory of where to go, and what to do down there.  The Hotel’s Wi-Fi connected to the tablet just as easily as it did on the bus, but this time the Wi-Fi worked great. I took advantage of the Yelp application and made some decisions on where to go and where to eat.

Being that GQ and I are avid viewers of the show Man vs, Food, I decided it wouldn’t be Memphis food if we didn’t go to the places that were showcased in that show. With the help of the Samsung Galaxy, we were able to find the locations, read reviews and have for us a step-by-step navigation on how to get there from Google Maps.

Google Maps is already installed on the tablet and runs just as it would run on any desktop or laptop computer.  You have the ability to zoom, track directions, and you can even tap on individual locations to get the telephone number or review within seconds. 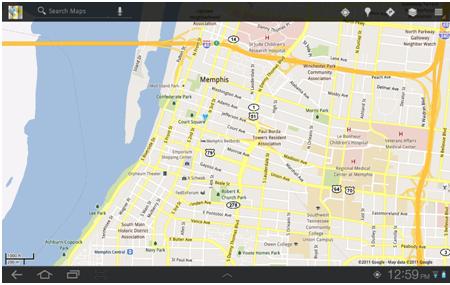 The multimedia of the Samsung Galaxy comes with a 2.0 megapixel front camera and a 3.0 megapixel auto focus with flash rear camera.  The video has 1080p playback and 720p capture.  The interface for both is extremely easy to use. 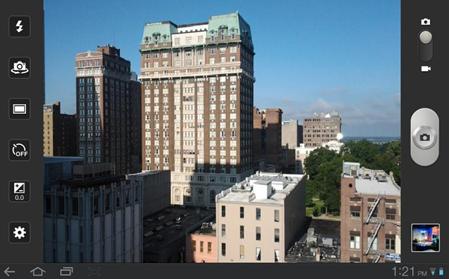 The above is what it looks like when you are taking a picture off the tablet.  The image is in the center with a controller border on the left and right.  You can change the settings on the left as well as turning the flash on or off and other changes.  The left side is even easier with a button changing from camera to video and the large button below takes the image or starts the video.  Below that, is a library of what you have taken.  The video below is an example of the full HD video taken of a trolley on the streets.

Both the images and video were taken off the tablet and put onto this blog via the USB connection that was provided.  Recognizing and removing the files I needed was as easy as drag-and-drop.

Up next: concluding the trip with the Samsung Galaxy and an overview.