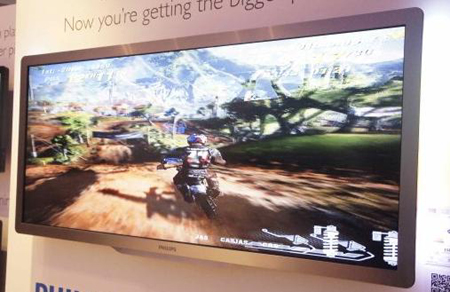 Long ago are the days when my buddies and I would rush home to a friend’s house after school to play James Bond’s Goldeneye on Nintendo 64.  The versus-matches against the characters are an iconic moment in my childhood and it redefined “split-screen” multiplayer.  “Quit looking at my screen to find out where I am!” my friend would shout at me after I’d killed him 6 times in a row with Bond’s Golden Gun. I only sneaked a peek a few times, really…

Technology has advanced incredibly since those early days, and a new TV from Philips is going to redefine at-home multiplayer and do away with those so called “screen sneak peeks.”  The Philips Dual View TV uses 3D technology to create separate left and right images. Gamers will use two sets of special 3D glasses (one with two left lenses, the other with two right lenses) to view the 2D gameworld from their character’s point of view only.

Right now, the technology is still in its early stages, but hopefully this will soon be perfected and playing against your friends will be a blast once again.