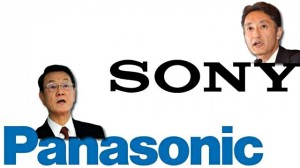 Reuters is reporting that television producing giants Panasonic and Sony have partnered to begin development on next generation organic light emitting diode (OLED) televisions. The once rivals are working towards developing affordable screens and hope to push their South Korean competitors – Samsung and LG – out of the marketing.

“While Sony is developing technology to fabricate screens using sprays, Panasonic is using inkjet printer technology to make prototype OLED screens, and has invested 30 billion yen ($374 million) to set up a test production line at a plant in Japan,” Reuters said while quoting the Nikkei Business Daily.

If the partnership is both real, and successful, the two  Japanese manufacturers will stand to gain some foothold in a market dominated by their South Korean counterparts. We’ll see what happens later this week, so tune in as we keep you updated.

Chicago Tribune's Office Space: The Brothers Abt
Abt's Mobile Installation Dept goes back in time with this Cadillac
0 Comments
By Pete R