Big news out of Cupertino today, as Apple released new versions of the iPad, iPad Mini and various Mac computers.

Both the iPad and the iPad mini received impressive new hardware changes, as opposed to marginal mid-life refreshes. The iPad Mini will now be spec’d with a Retina Display, with a 2048×1536 resolution giving it a 326ppi screen. That’s a huge increase over the original iPad Mini, which, while nice, sported a comparatively dull 163ppi display. Behind the gorgeous new display, Apple stuffed the new 64-bit A7 chip that debuted in the iPhone 5S. As a result, not only does the new iPad Mini look much better, its processor performs 4 times as fast, with an 8x jump in graphic processing speed. Rounding out the upgrades are the M7 motion coprocessor chip from the iphone 5S as well as a new MIMO Wi-Fi antenna for a quicker wireless speed.

The iPad Mini’s big brother, the 9.7-inch tablet now called the iPad Air, also got a nice revamp that was part performance and part appearance. You’ll again find the new A7 and M7 chip combo, just like the iPad Mini and iPhone 5S. MIMO Wi-Fi is also present in the iPad Air. The most impressive change to the iPad, however, is the all-new body. Now just 7.5mm thick, the iPad Air is 20 percent thinner than the previous generation. The slim body also weighs in at just 1 pound (or 1.05 pounds, for the model with a cellular antenna). According to Apple, the iPad Air is the lightest full-size tablet currently available.

As with previous generations, both the iPad Mini and iPad Air feature the standard Apple features, including front and rear cameras, 1080pHD video recording and a range of hard-drive sizes. They’ll both be available in either Space Gray or Silver, and feature Wi-Fi-Only models as well as versions compatible with the Big 4 cellular providers’ data networks (including HSPA+ and LTE high speed data). All models are slated to be available early in November. 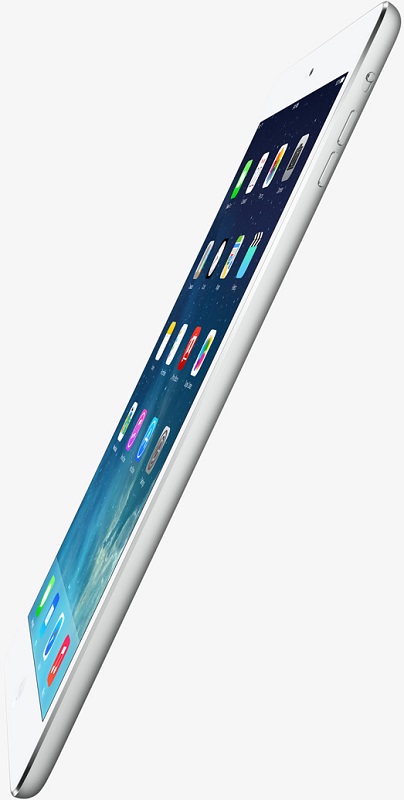 The New iPad Air is thinner and lighter than ever. At just a pound, it’s the lightest full-sized tablet on the market.

Also spotlighted were the Apple MacBook Pro and Mac Pro computers. The MacBook Pro models get a slight physical makeover, with the 13-inch version getting slimmed down to just .71 inches thick and weighing in at less than 3 lbs. Models will be available with either Core i5 or i& processors, and come packed with Thunderbolt 2 ports, 802.11ac Wi-Fi antennas and will be preloaded with the OSX Mavericks operating system. On the desktop side, purchase availability was finally announced for the cylindrical Mac Pro, which we first heard about back in the summer. The Intel Xeon-powered multimedia powerhouse should hit the market this December, priced at $3000 and up.

We’re looking forward to the availability of all of these products. While hard dates haven’t been announced for any of them, we’ll be sure to let you know when we have them in stock or ready for pre-ordering. Keep your eyes peeled here and on the Abt Facebook Page for more info.

2013 Abt Builder Appreciation Sale
Don't Wait Until it's too Cold to Get Ready for the Winter!
0 Comments
By Pete R

Come Join the Abt Team!