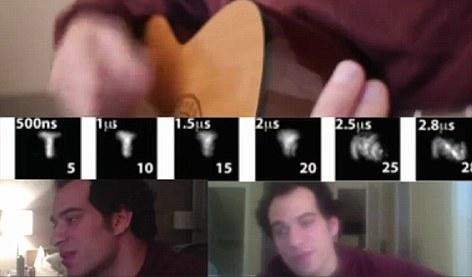 There has been a long evolutionary path of physical media storage that has seen the likes of laser disks, zip drives, and Betamax be tossed aside for smaller, larger capacity storage but, what happens when we take away the physical?

What if you could consume media by inhaling gas? Nothing illegal, just some scientists who managed to store data in gaseous form. An article on Ubergizmo states that this is the first time in history images are stashed on a non-solid format, and can be played back afterwards.

It’s called “Temporally Multiplexed Storage of Images in a Gradient Echo Memory” where information is stored in small vials of rubidium, and light is beamed into a 20cm long tube. For playback, a magnetic field is reversed, while the control beam is turned back on, enabling the atoms to move in the opposite direction. The has stores ‘quantum’ information. Don’t expect to store an entire feature length movie in this format just yet—we aren’t that advanced yet—but this could represent a building block for the future of say, computers or video game consoles.

Only the future will tell if this technology will be of any use to use but either way it’s pretty neat. The Ubergizmo headline says it all: “Movies encoded into gas, are gas chambers the new cinemas?”

A Summer 2012 Family Road Trip With Abt
10 Year Anniversary of Abt Electronics in Glenview, IL!
0 Comments
By Pete R