It’s no surprise that Apple made a huge splash with the debut of the original Apple Watch. It quickly became the best-selling smartwatch available, ranking at the top of countless “Best Of” tech lists. A worthwhile revamp would no doubt be a tall order. Here’s what improvements were brought to the Apple Watch Series 2.

The most major upgrade is the addition of fully-waterproof construction. While the original Apple Watch was water-resistant, the Apple Watch Series 2 is built to survive daily dunks into serious depths of water, with a waterproof rating down to 5o meters.

Inside, a full technical revamp promises overall snappier operation. The system-in-package is now rocking a faster dual-core CPU that’s up to 50 percent faster and a GPU that offers up to twice the graphic performance, so your wrist-mounted screen will be able to offer a visual experience closer to that of a high-end smartphone. The new graphic advancements will help power a more beautiful multi-media experience that will be supported by the 2nd-gen display that’s more than twice as bright as the original Apple Watch screen.

Built-in GPS means you can navigate your way around a city or accurately track your daily run without carrying your phone. The data gathered by the Apple Watch pushes automatically to your iPhone, so there’s no worry about keeping track of your workouts across two devices. Another great feature is the offline mode that gives you full navigation access even when you’re not in range of data service.

Apple also showed off an all-new ceramic body, reminiscent of the bright white designs that helped put the iPhone, iPad and Macbooks on the map so many years ago. The new material is not only super-sleek, it’s also four times stronger than stainless steel.

As part of a new collaboration with Nike, Apple Watch Nike+ combines the best of what both companies have brought to the fitness tracking and analytics world. The foundation of the new system is a simple interface that makes it easy to start and monitor your run tracking, plus a clever motivational system that gives you reminders of the beautiful weather, your running partner’s stats, or just a playful suggestion to get moving. There’s even a special “Sunday” mode that encourages you to hit the pavement on the weekend, based on the knowledge that a Sunday spent exercising usually leads to a week more dedicated to fitness. 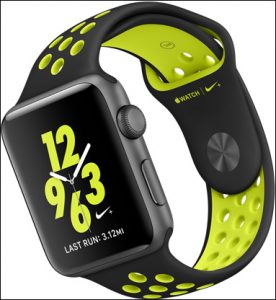 Abt Goes Gold for Cal's Angels
The New Apple iPhone 7 is Here!
0 Comments
By Pete R