In addition to iLife ’09 and iWork ’09, Apple introduced a new 17-inch MacBook Pro at Macworld today, featuring the same unibody aluminum enclosure as the 15-inch MacBook Pro, which was released several months ago. The 17-incher weighs just 6.6 pounds and measures just 0.98-inches thick, making it the thinnest and lightest 17-inch model on the market, according to Apple. 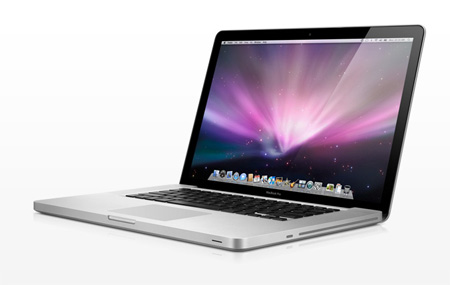 It also has the same large glass multi-touch trackpad as the other newer MacBooks, but uses a new lithium polymer battery that is said to deliver “up to eight hours of use and up to 1,000 recharges for more than three times the lifespan of conventional notebook batteries,” according to Apple. The only drawback is that it is non-removable.

The new MacBook Pro also sports an ultra-thin, widescreen glossy 1920 x 1200 display with LED backlighting, a 700:1 contrast ratio, and a 60 percent greater color gamut than the previous 17-inch model. State of the art NVIDIA graphics and the latest generation Intel Core 2 Duo mobile processors are also included, along with a 320GB 5400 rpm hard drive standard with a 320GB 7200 rpm hard drive and 128GB and 256GB solid state drives as options. It is available for pre-order now and is priced at $2799.   —by Graham W.