More New Toys Are On The Way

There are probably millions of people throughout the world who wish they could be in Las Vegas in a few days, and not just for the gambling. The Consumer Electronics Show runs from Jan. 7 through Jan. 10 in that desert oasis (with a few pre-show activities taking place over the weekend), and it promises to bring thrills and chills to tech geeks and gadget freaks alike—not to mention us regular folk who enjoy new audio and video gear and other electronic toys even though we don’t know what makes them tick.

International electronics manufacturers will be showcasing their latest wares amid all the conferences, speeches (including a pre-show keynote address by Microsoft chairman Bill Gates), and celebrity sightings (expected to be on hand are Mary J. Blige, Yoko Ono, and Kevin Costner and his band, among others). Kevin Costner has a band?

Some of the rumored products include: a 150-inch plasma television from Panasonic; a 9mm-thick HD Plasma TV from Pioneer; a Westinghouse digital wireless HDMI HDTV; Mitsubishi’s 3D TV technology, which does not require viewers to wear funny goggles (spoil sports); and a slew of updated computers, cell phones, digital cameras, and other electronics we can’t live without. You can also expect some mysterious emerging technologies to be revealed that will shock you like you just carried your toaster into your bathtub.

The second this is posted, a thousand more new electronic gadgets will probably pop their heads up and command the attention of consumers and merchandisers before the show even starts. But don’t worry about trying to keep up with all the new products and features—you can rely on the Abt sales staff to do all the heavy learning for you.—by Graham W. 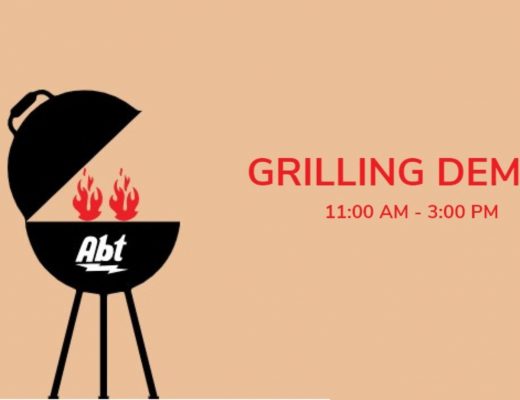 Grill Demos are Back for the Summer!