Is this the end of the laptop?

It’s been just over four years since the tablet computer race truly started, with the release of the Apple iPad. In that time, while tablets have become insanely popular, it’s still not uncommon to hear questions like “what’s the point?” One of the main criticisms levied against tablets is that they’re just glorified toys, too small and underpowered to be true computer replacements. With today’s release of the Surface Pro 3 tablet, Microsoft might finally have a true laptop-killer on its hands.

The Surface Pro 3 takes the concept of the original Microsoft Surface Pro and Pro 2 and builds upon it in every way. By the looks of it, Microsoft has eliminated many of the nitpicks that users had about those first two versions. 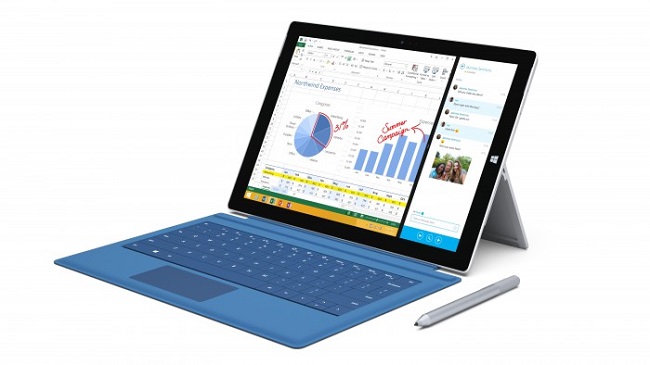 Most noticeable is the size of the Surface Pro 3, which is larger and smaller in all the right ways. The display is now an impressive 12-inch, ClearType Full HD screen, packing a 2160 x 1440 resolution. Because Microsoft wanted the Surface Pro 3 to mirror the experience of writing on a piece of paper when the tablet is in portrait mode, they went with a 3:2 aspect ratio. That’ll give you black bars when watching movies in landscape mode, but the extra screen real estate will be nice for productive tasks like using MS Office or Photoshop. And while the display size grew, the tablet body got a little thinner. The Surface Pro 3 is only 0.36 inches thin (half as thick as a MacBook Pro) and weighs only 1.76 pounds.

Despite the impressive weight and thinness, the Surface Pro 3 is packing some power under the hood. Running things will be a 4th gen Intel Core CPU, available in i3, i5 or i7 flavors. 4 or 8 GB of RAM will keep things humming smoothly, which will be especially nice since the full Windows 8 OS can take advantage of all of today’s most popular productivity software. An SSD hard drive will provide from 64 to 512 GB of storage. If that seems like too little in today’s media-hungry world, fear not. Built-in USB 3.0 ports mean you can easily add on a speedy portable external hard drive, and a microSD card reader lets you swap in media from a camera or smartphone.

The integrated kickstand holds the Surface Pro 3 at any angle between 0 and 150°.

There are lots of other exciting features that make the Surface Pro 3 one of the most impressive tablets ever released. A Mini DisplayPort which lets you hook up an external monitor. The new Surface Pen (included) gives users a lifelike drawing and writing experience. New click-in keyboards are wider, have larger track-pads and offer more typing stability. When used in conjunction with the new friction-hinge, which offers a continuously-adjustable viewing angle, the Surface Pro 3 can match the functionality of nearly any laptop or ultrabook.

Save on GE Appliances at Abt!
New Tumi Luggage Products at Abt
0 Comments
By Pete R