As the 2008 Macworld Conference & Expo draws to a close today, let’s take a look at some hot Apple accessories you might not have heard about yet.

The iBoom Jukebox from DLO is an iPod speaker dock that’s shaped like a mini jukebox. It features two 1-inch tweeters and two 3-inch woofers, an RF remote that can be used from up to 100 feet away, and built-in controls on an illuminated touch strip. It is expected to ship this spring at a cost of about $200. The new PowerDock from Griffin ($70) can charge any combination of four iPod models simultaneously, and even works with the iPhone.

Belkin introduced a new line of sleeves for the new MacBook Air in a variety of colors and materials with various straps and fasteners. Not to be outdone, Web designer Jona Bechtolt and freelance science writer Claire L. Evans have created a laptop case for the MacBook Air called the AirMail, which looks just like the manila envelope Apple CEO Steve Jobs used to carry the “Air” onstage at his Tuesday keynote address. The AirMail website says it is “handmade out of durable upholstery-grade vinyl, and lined with fuzzy, soft fleece.”

The iFrogz Audiowrapz ($24.99) comes in eight colors and not only protects your iPod nano but also has three external speakers. The speakers do not draw any power from the iPod and are deactivated when you plug in the headphones. For those of you who like to mix business with pleasure, the iCarta from Atech Flash Technology combines a toilet tissue holder with an iPod speaker system. That’s Atech “Flash” Technology, not “Flush.”

Here’s a little more information about Apple TV that we haven’t mentioned yet: It allows you to buy or rent movies and TV shows directly, with no computer required, and videos begin streaming within about 30 seconds.

Special thanks to all of you who kept your fingers crossed—as we requested in yesterday’s posting—in the hopes of getting another crazy quote out of Apple CEO Steve Jobs. In an interview with CNBC reporter Jim Goldman, Jobs was asked what he thought about a statement by Robbie Bach (president of Microsoft’s Entertainment & Devices Division) in which Bach said the Zune is a worthy alternative to the iPod. Well, Jobs didn’t exactly take kindly to that and asked, “Was he inebriated?” followed by, “Do you even know anyone who owns a Zune?” While this isn’t exactly the nicest thing to ask about someone, Jobs did class it up by using the word “inebriated.” I wonder if he read that word somewhere. 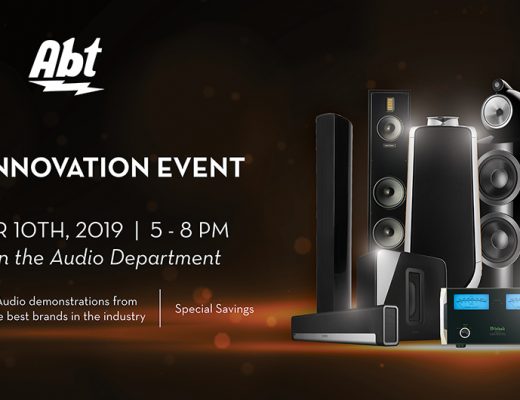 The Abt Audio Innovation Event Returns