The editors of Macworld magazine have presented this year’s Macworld Best of Show awards to 11 products, and—no surprise here—the MacBook Air was among the winners. The “Air” (can we call it that?) was cited by the editors for being “almost frighteningly skinny. And yet it really is a full-fledged Mac.”

Also receiving recognition was Photoshop Elements 6.0 from Adobe for being quicker to launch, sporting a dramatically revised interface, and having all sorts of tools that amateur photographers will appreciate.

Even Guitar Hero III won an award for letting people live out their rock star fantasies while also being great fun and encouraging more social interaction than most video games. You may remember Microsoft chairman Bill Gates being joined on stage at last week’s Consumer Electronics Show by famed rock guitarist Slash for a Guitar Hero battle.

Most of the other award winners involved new software or software upgrades that the casual computer user probably hasn’t heard of and doesn’t really need.  Beyond the awards, we didn’t really expect any earth-shattering news out of Macworld today, but we didn’t even get any crazy quotes out of Steve Jobs. There’s still one more day of Macworld, so keep your fingers crossed.      –by Graham W.

Macworld Wrap-Up
Day 2 at Macworld
0 Comments
By Abt

Windows 8 at Abt Electronics 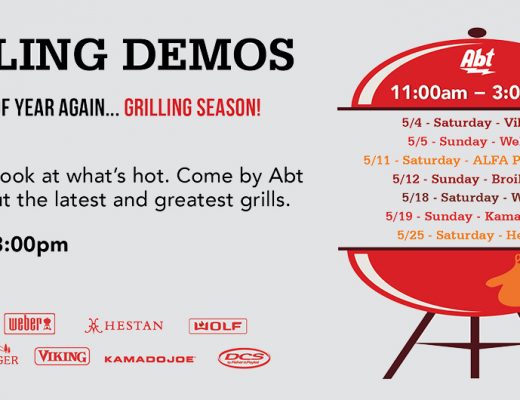 Summer Grill Demos Are Back