The LG Laser combines the picture size of a projector with the simplicity of a wall-mount LCD TV. 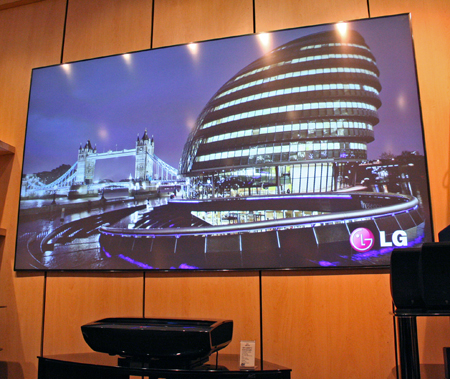 The LG Laser TV projector and screen, in use at the Abt Showroom.

CES 2013 may be over, but that doesn’t mean we can’t still enjoy some of the exciting toys that the manufacturers showed off. Abt Electronics is proud to be the only retailer in the nation currently displaying the all-new LG Laser TV, dubbed the “Hecto.” Shipped straight to us from the convention in Las Vegas, the Hecto is an innovative system that combines an Ultra Short Throw (UST) projector and a special screen to create a theater-like viewing experience without the complexity of typical projector-based home theaters.

The screen of the LG Laser TV measures 100″ on the diagonal, making it larger than any wall-mountable TVs currently available. The projector unit is of comparable size to traditional projectors, but it can be placed as close as 22 inches from the screen. Since most projectors need 10 feet or more “throw distance,” the Hecto Laser Projector completely changes the support infrastructure needed for the average home theater. 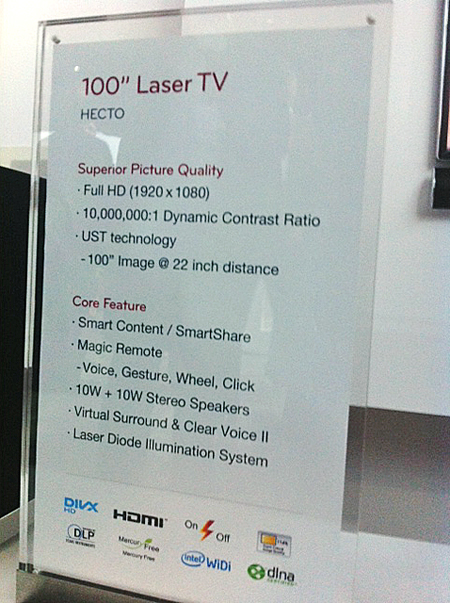 If you had previously wanted to upgrade your home theater setup from, for instance, a plasma TV to a projector, you would have had to find a way to run your cable line and other video inputs from one side of the room to the other, where the projector would now be located. The minimal throw distance of the LG Laser TV system means you can hang the screen where your plasma once was, and simply place the Hecto Projector on your existing TV stand with the components that will feed it video. This avoids the labor-intensive problem of rerouting cables up into the ceiling to accommodate typical projector placement. You also won’t have to deal with an unsightly projector hanging in the middle of the room, or damaging your ceiling to mount it, which can both be issues for those whose home theaters are multi-use rooms.

The technology created for the LG Laser TV also surpasses the lamp-based illumination used in normal projectors. With full 1080P Full HD resolution and a staggering 1,000,000:1 dynamic contrast ratio, the Hecto creates a picture that rivals that of an LED-back-lit LCD TV. Whereas a front projector usually needs to be used in a dark room, images from the LG Laser TV look fantastic in all lighting conditions. Our display is set-up in a pretty well-lit room, and the screen shows no signs of wash-out. If you didn’t know it was a front projector, you’ probably never guess it. Best of all, the laser illumination has an estimated lifespan of 25,000 hours, around five times better than mercury-based illumination sources. 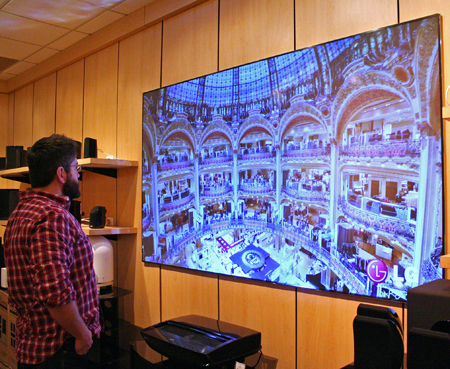 Big enough to impress even the burliest lumberjacks.

LG packed in an array of inputs, including 3 HDMIs, an RS-232 interface and an optical audio output. A built-in digital tuner, integrated 10W speakers and LG’s Smart TV capabilities round out the package. Those integrated features combined with the Ultra Short Throw abilities make the Hecto extremely versatile. As described by LG Electronics President and CEO, Havis Kwon, it is “perfectly suitable for both the boardroom and the living room.” We agree, though I don’t think we’re going to be using the display for our business meetings any time soon. It looks too good where it is right now. If you’d like to see it in person, we invite you to stop by our Glenview Showroom and head over to the speaker room across from our famous fish tank.