Ladies and Gentlemen, The New iPad Has Arrived 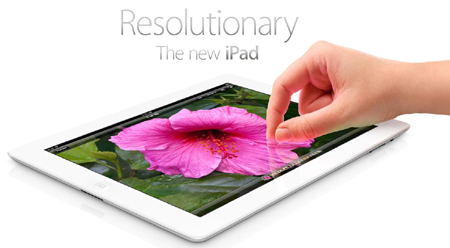 “It’s hard to imagine a time without [the iPad],” states Tony Bradley from PC World.  Apple has announced the newest family member of their line of tablets. The new iPad, not iPad 3 or iPad HD as it was rumored to be called, has a display of 2048 x 1536, that’s a total of 3.1 million pixels.  An A5X processor is used to handle the super new graphics.

The New iPad also has an upgraded camera.  The video is recorded in 1080p and both the front facing camera is 5-megapixel backside illuminated sensor on the back, 5-element lens, IR filter, and ISP.  Speed has increased as the old iPad 2 has 3.1Mbps on EV-DO, 7.2 on HSPA, where the New iPad now has, has 21Mbps HSPA+ and DC-HSDPA at 42Mbps, with LTE taking the cake at 73Mbps.  The battery life is expected to last around 10 hours.

Look for it to hit the market on March 16th!

Save 20% Instantly on All Tumi Luggage and Wallets
Spring Break Deals at Abt!
Appleipad 3
0 Comments
By Pete R