It’s A Macworld After All

Macworld 2009, which takes place this week in San Francisco, is especially significant for a couple of reasons beyond the usual new product announcements. This year’s event represents the last time Apple will participate in the show, and today’s big keynote address was delivered by Senior Vice President of Worldwide Marketing Phil Schiller instead of CEO Steve Jobs, who once again has had to respond to rumors about his health. Jobs released a statement yesterday in which he said his recent weight loss was caused by an easily treatable “hormone imbalance” with a “simple and straightforward” remedy.

So with Apple stockholders apparently calmed by Jobs’ statement, Schiller took the stage today to talk about the company’s newest software, hardware, and iTunes-related upgrades. Schiller began with the revamped iLife ’09, which includes new iPhoto, iMovie, and GarageBand features. iPhoto now makes it easier to organize your photos by events, places, and faces (with true facial recognition). It also offers geo-tagging (a map with pins to show where your photos were taken), and Facebook and Flickr support, among other improvements. 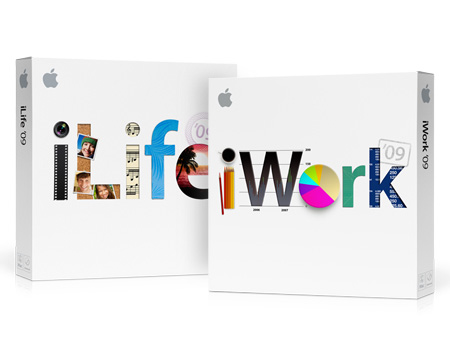 iMovie has added a precision editor function, advanced drag and drop, video stabilization, overlaying audio, and more. GarageBand now has an instructional feature to help you learn to play instruments like guitar and piano, along with the option of purchasing Artist Lessons ($4.99 each) featuring performers such as John Fogerty, Ben Folds, Norah Jones, Sarah McLachlan, Fall Out Boy’s Patrick Stump, OneRepublic’s Ryan Tedder, Sting, and more. Every new Mac purchase includes iLife ’09, and it’s also available as a $79 upgrade for existing users ($99 for family).

The new iWork ’09 includes Keynote ‘09 with Magic Move, which lets you automatically animate the position, scale, rotation, and opacity of any image, graphic, or text that is repeated on consecutive slides. You can also add the Keynote Remote application (sold separately in the App Store), which gives you the ability to control your presentation with your iPhone or iPod touch. Schiller also introduced the iWork.com public beta, a new service under development that will allow you to share iWork ‘09 documents online. iWork ’09 is now available for $79, or $49 with the purchase of any Mac.

See our next postings for information about the new 17-inch MacBook Pro and the latest iTunes upgrades.   —by Graham W.