If you were one of the thousands of people who visited Abt this past weekend, you might have noticed a new addition to our Atrium. The famous Humpty Dumpty is now sitting on a wall near the fountain, and he happily posed with customers, who were treated to free photos. The camera equipment and photo printers were provided by Canon. 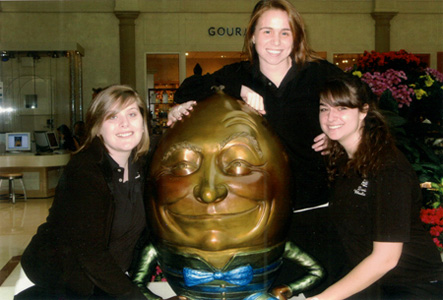 Since all the king’s horses and all the king’s men couldn’t do it, this particular Mr. Dumpty was put together by artist Kimber Fiebiger at her studio/gallery in Minneapolis. Kimber has been producing bronze sculptures and clay works for 29 years and displays many of them at her Joan of Art Gallery. She is regarded as an expert in the ancient art of transforming a clay sculpture into a work of bronze, which requires skills in several areas, and her creations have been sold throughout the country and have won several awards. 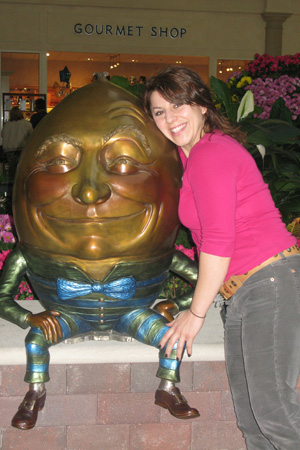 As you can see from these photos, people love to pose with Humpty, whose smile lets you know that he’s a good egg, and all that he’s cracked up to be.    —by Graham W.