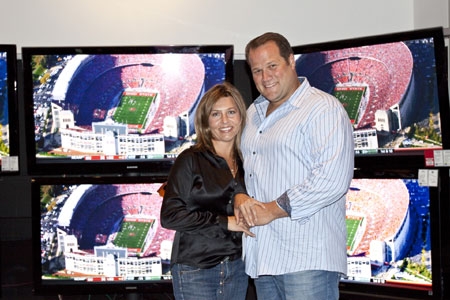 No better way to celebrate their love than to return to the site of their first date. Abt would be the place Jonathan Leicht would ask Edyta Czarnowska to be his wife. With the assistance of a DVD, Leicht dropped to his knee and asked for her hand in marriage. “Sure!!!” was Czarnowska’s excited response.

Saturday, October 10, 2009 was a monumental day for Leicht and Czarnowska. One year prior they were a couple on a first date, stopping at Abt—looking for a TV; now they are a happily engaged couple.

Leicht, in orthopedic sales, explained to me, Czarnowska, a doctor, was looking for a TV; he was just the man to help. As she was about to perform a surgery Leicht gave her a map of Abt’s location with a personal note at the bottom, promising dinner when they left. The two met at Abt, went to dinner, and have been dating for the last year.

The couple was given a gift card from Abt (to start off their gift registry), as well as dinner at TV. Once the couple posed for a few pictures and answered some questions, the couple made their way to the appliance section of Abt. Before leaving to celebrate, they needed to buy a dishwasher. After all, that was the reason Czarnowska thought she was at Abt in the first place.