Grablets might sound like vicious, furry creatures from a forgotten 80s horror-comedy, but, thankfully they’re something much better.

CES 2013—There’s no denying that the iPad has been one of the most popular gadgets released in the last few years. As such, its success has prompted a flurry of add-ons and accessories to hit the market, many of which were only marginally useful. We find it refreshing, then, to find one that’s truly innovative.Josh swung by the Grablet booth at CES, where he took a look at their product that answers on oft-asked question about the sleek tablet: How the heck am I supposed to hold this thing? 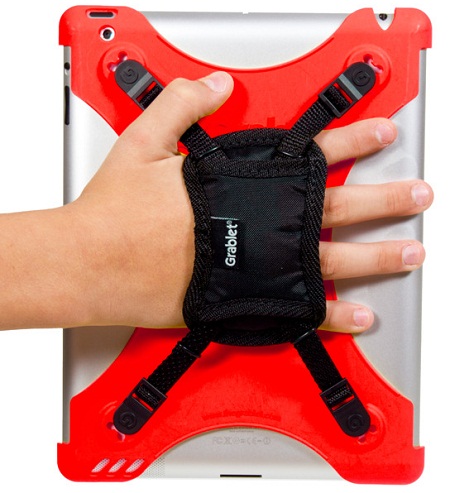 The Grablet makes holding your iPad secure and fatigue-free.

The Grablet is a pretty simple device. Made of a single piece of flexible, nearly indestructible TPU plastic, it slides over the back of your iPad, gripping the tablet at its corners like a newborn xenomorph on the face of a Space Marine. A patented mounting system engages with a pair of straps in a variety of configurations, giving you multiple carrying options. The main idea is to provide an interface which is not only secure, but also comfortable. The strap does all of the holding, preventing fatigue from the normally awkward way you’d hold a tablet. Grablet insists that the interface is 100% secure, and gets more secure the harder you pull the handle. Check out the video, in which the Grablet rep gives a demonstration that could have gone hilariously wrong if their product didn’t perform as claimed. Check out the video below for some of the other awesome products Grablet makes for the iPad.

Sennheiser HE90: The Holy Grail of Headphones
Tesla Model S Info Console: Abt Checks It Out
CES 2013iPad
0 Comments
By Pete R