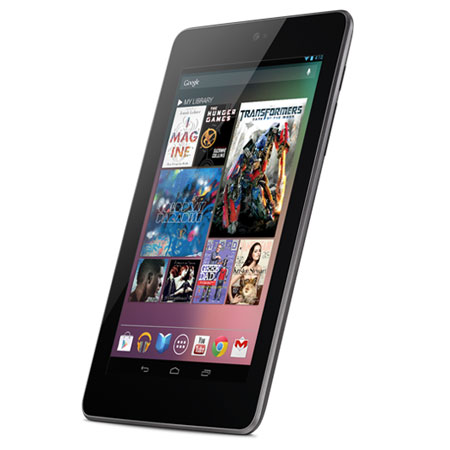 We got the pleasure of getting our grimy little fingers on Google’s impressive new 7-inch tablet, the Nexus 7. Google’s first attempt at designing and building a tablet from the ground up was essentially everything they said it would be: smooth like butter.

Let’s start with the build and feel of the device. At a mere 10.45 mm thick and weighing in at less than one pound, the Nexus 7 is great for getting cozy and reading a Google Play magazine or browsing the web with one hand.  Despite the size, the Nexus 7 holds a decent charge—about 6-8 hours of use.

The rubbery grip on the back plate is a nice touch but, since most of us use a cover or case, it’s not that big of a deal. The Nexus 7 does not have a rear-facing camera but does have a front-facing camera which, because there is no camera app, can only be used for video calling on Skype, or hanging out with friends on Google+.

For the hardware shortcomings , the Nexus 7 makes up for it ten-fold with the guts inside the device. The NVIDIA Tegra 3 processor and 1GB of RAM make swiping through apps, web pages, and menus quick and smooth.  Even the multitasking interface is simple and fast enough to bounce through apps and pages without any hesitation.

The Nexus 7’s new Jelly Bean also adds a couple features on its own that make the Nexus experience better than any Android of the past. Google has enhanced the notification system by adding more information to the alerts and allowing for sharing directly from the notification menu without having to open another app.

Voice enabled search was also revamped with a search option very similar to Apple’s Siri. Google designed this new search as search was intended:  searching for “How old is Abt Electronics” scrapes the web for a birth date and returns a numerical answer as well as the Google search results. Google Now brings you the relevant information you want without requiring deeper search and more time.

While Google may be selling the Nexus 7 at a loss, they’re hoping you’ll pour those saved doll hairs into their new Google Play store.  Within Google Play you can purchase movies, books, music, apps, games, and more at the single push of a button. The store is rather fragmented on the Nexus 7 with separate icons for books, movies, music, and apps but, it does make navigating to exactly what you want a little easier. While the content available is still less than that of iTunes and Amazon, it still looks great on the screen and will hopefully grow as the Nexus 7 gains popularity.

Let’s be clear – if you’re looking for an app-intensive experience (like the iPad) on the Nexus 7, you’re going to have a bad time.  Developer support of Android is still quite low compared to Apple and, while smaller phone apps work well on the 7-inch screen, most apps are developed for a 10-inch screen and take full advantage of the real estate available to make the apps as immersive as we’re used to. Google (and we as consumers) are definitely hoping that developer support starts to pick up soon.

In the meantime, the Google Nexus 7 tablet is the best tablet for $200, and delivers loads of content in impressive resolution. It’s fast, intuitive, and smooth – like butter.

Thoughts? Questions? Use the comments and we’ll answer everything we can.

Connect with Scott on Google+