Gear Up for Comic Convention Season!

Now that the Chicagoland area is beginning to thaw out from the dredges of winter, we’re entering an all-new season full of fun. And no, we’re not talking about spring. It’s that time of year once again to dust off your cosplays, pull out some comics to get signed and assemble your crew to meet you at your nearest comic con. But whether you’re driving to McCormick Place this weekend for C2E2, flying to San Diego for Comic-Con, or taking a bus to something smaller and more local, we here at Abt have a few suggestions to make your Con-going experience a bit easier.

Though we may not have any Time-Turners in stock, so that you can catch two panels at the same time, or a TARDIS to get you from one end of a convention center to the other, we do have a few handy gadgets in our inventory that could help veteran attendees and con newbies alike. 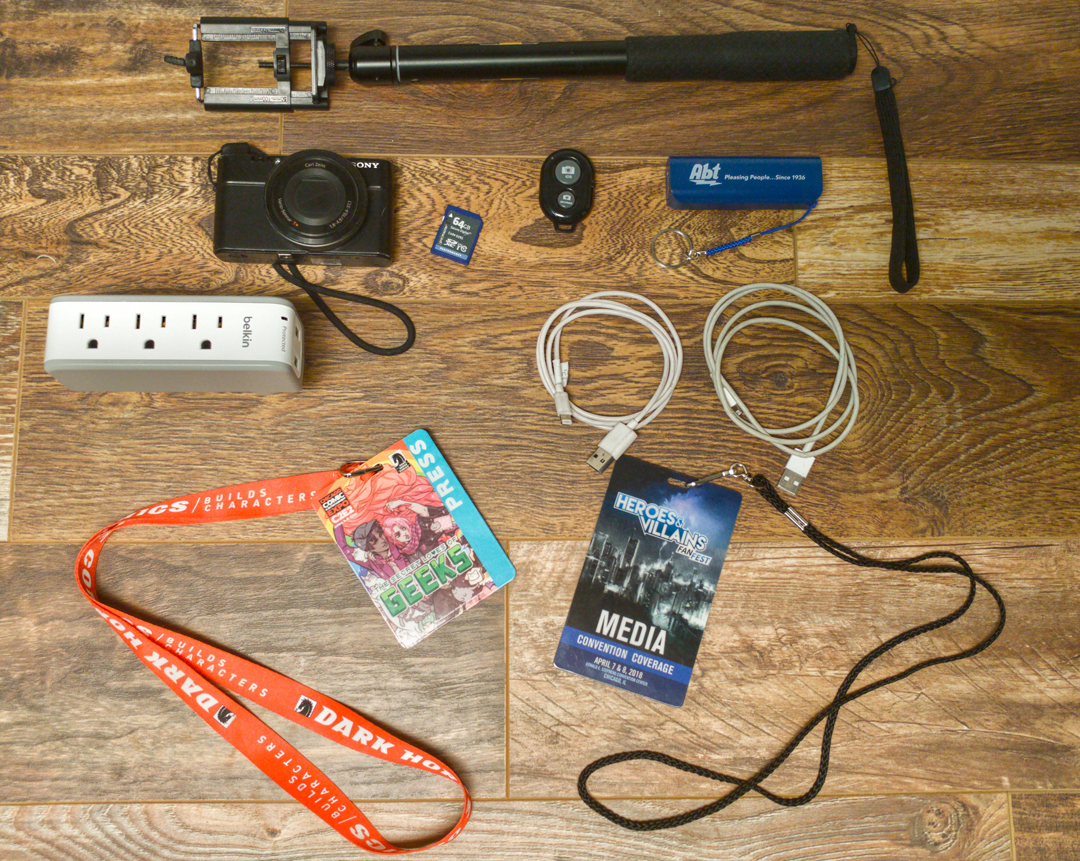 Now, before you go and judge us for this one, there is a totally legitimate reason to carry around one of these ridiculous contraptions with you at a convention. First, if you’re looking to truly capture the essence of a con with a panorama picture, the selfie stick gives you some extra reach to get more of your surrounding area into the shot. Second, when posing with large groups of cosplayers, a selfie stick could be useful to include the itty-bitty Deadpool all the way in the back. Finally, if worst comes to worst, your tool can double as a weapon when the hordes become unruly as you brave the crowds (just kidding… please don’t hit anyone with a selfie stick!)

A convention is a great place to test out your photography or videography skills. With a plethora of people and places to see, there are tons of subjects to shoot with your fancy camera (pro tip: always ask cosplayers for permission first). But there’s nothing worse than running out of storage space in the middle of the day when you’re trying to get pictures of your favorite celebrities on stage or footage of an intricate Transformers cosplay. That’s why it’s always important to have extra storage in your camera bag. They don’t even have to be heavy hitters either—maybe you have a 64 GB or 128 GB SD card in your camera regularly, but keeping a couple smaller cards as back-up is just fine. No matter the capacity, just make sure that you have some extra memory cards with nothing on them.

Suggestion: If you’re attending multiple days of a con, at the end of each day, transfer all of your photos to your computer so you can start the next day with fresh cards. Otherwise, you’ll have to start deleting things and you never know what you’ll miss while you’re doing that.

Generally, it’s good to carry an extra cable for your phone with you at all times, just in case you run out of battery. However, this especially applies when you’re out and about at a con. If you’re an avid social media user, you’ll likely be recording videos for your Instagram and Snapchat or snapping pictures left and right. That sort of thing can drain your battery pretty quickly, so you’ll have to plug into the wall at some point and get some extra juice. Don’t take the chance that you’ll be able to find a spare charging cable when you’re in a bind. But that leads us to the next product on our list.

So you have your charging cable, but do you really have time to sit next to an outlet while your phone charges? More likely than not, the only downtime in your schedule will be spent waiting in line for a panel, an autograph session, or a photo op. And even if you’re lucky enough to find a power outlet, it will likely already be occupied by people who got in line before you did. But with a power bank or two in your bag, none of that is your concern. Just plug your phone in and continue with your con experience. And with a long enough cable, you can even continue to use your phone normally while it’s plugged in.

Of course, there’s a chance you’ll burn through your battery bank as well. Or maybe when you do find an outlet, you and all of your friends need to plug in. One gadget that most wouldn’t consider bringing along is an item that is a common sight in every home: a surge protector power strip. This tiny device lets you plug up to five devices into a single outlet, so not only does it increase your chances of getting to plug in, it’s a great way to help out those around. After all, there’s a good chance that you’re not the only one that needs a power boost. When you open up your surge protector or power strip to those around you, it’s a great way to make friends!

Of course, everyone is different. Aside from food and water (which everyone should carry with them at events like these), Gary from Customer Service might have a different convention survival kit than Sergio from Cashiers. These are just a few things that could make your life at any con better, but what are some of your go-to items? Let us know what you normally bring with you to a con in the comments below.