Football Season is Here! Get Tailgate Ready at Abt.

We’d been paying attention to the calendar as it crept closer to fall, but this still took us by surprise: Football season has begun! And that means it’s time to get started on the ages-old tradition of the tailgate. Because one of the greatest ways to spend a Sunday afternoon is in close proximity to thousands of like-minded fans while enjoying tasty foods and beverages. Abt is your headquarters for everything you need to throw the perfect tailgate party. Let’s get started!

If a tailgate party is a house, then food is definitely the foundation. There seem to be two main schools of thought when it comes to setting up your stadium smorgasbord: pack it ready-to-eat at home and bring it on the road, or cook it on the spot. We say pack the side dishes at home, but it’s no tailgate unless you’re cooking marinated meats in the parking lot. But while you may be master of your massive, backyard BBQ grill, it’s probably going to be a huge hassle trying to lug it out to the stadium. Instead, opt for a smaller, portable grill. Thankfully, “portable” doesn’t have to mean a compromise.

Enter the Weber Q series of portable grills. They’re packed with everything you love about your backyard Weber, squeezed into a size that’s meant for easy travel. With three different versions, you can find a model with enough grill space to fit anywhere from 8 to 19 full-size burgers at once, yet still packs into your trunk or the back of your pickup. Plus, features like electric ignition, a built-in thermometer, and fold-out side trays give you all of the convenience of a full-sized grill, all in a compact package. The icing on the cake (or the sauce on the ribs?) is that the Weber Q grills are available in a variety of colors, giving you one more way to show your team spirit.

Another option to consider, especially for those who don’t ascribe to the Hank Hill school of cooking (“Taste the meat, not the heat”) and prefer the smoky taste of coal or wood grills, is the Traeger PTG+. This Portable Tabletop Grill is fueled by wood pellets, just like the rest of Traeger’s grill lineup. But, as the name implies, at just 20 inches wide by 19 inches deep, it fits neatly on a tabletop. Under the hood is a 173 sq. in. grilling area that can cook eight burgers or a couple slabs of ribs at once. The wood pellet system is unique because it provides the even, controllable cooking style of a gas grill, but gives your food the smokey flavor of charcoal or wood cooking. And cleanup is much easier than with a kettle charcoal grill.

Of course, just because you’re cooking meat over an open flame in a parking lot, preparing to support the most violent sport in modern civilization, that doesn’t make you a savage. Sometimes, you want to enjoy the finer things in life, even at a tailgate party. Sometimes you just want to wash down that rare half-pound, bacon-topped beef patty with a nice glass of Cab Sauv, or maybe your go-to football foods consists of assorted veggies and a killer spread of meats and cheeses. If so, have a look through our extensive collection of products from Picnic Time, who have what you’ll need to not only transport your food in style, but to keep it cool when you get to your destination and even help nicely present it when it’s time to chow down.

There’s a good chance that even though you’re in the parking lot of the stadium, you don’t have tickets to get inside. So you’ll need some way to follow the game.

The simplest way is with a portable AM/FM radio. If you go the lo-tech route, twenty bucks gets you the Sony ICF-P26, a pocket-sized radio that  runs on a pair of AA batteries. With an analog tuner and built-in telescopic antenna, it could not be any simpler. It’s even got a headphone jack in case the crowd gets too loud. But it’s best for those who are tailgating with a smaller, less rowdy group.

In a larger group and need something that puts out some real volume? Consider a rugged radio like the Sangean Toughbox TB-100. Designed to survive the abuse of a construction jobsite, this rough-and-tumble radio has a rain, dust and shock-resistant construction that will help it survive even the rowdiest tailgate parties. The TB-100 runs on four C-type batteries, which give it enough juice for an entire afternoon of listening. Or, plug it in to listen endlessly—it will even recharge the batteries while you do so (assuming you’re using rechargeable batteries). 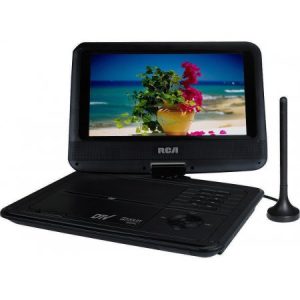 A portable TV is a low-tech way to catch the game from the parking lot.

If you’re the type of person who can’t get into the game unless you can see it, you’ve got a few options. The simplest one is a portable TV like this RCA 9″ DVD/TV combo, which tunes into your local broadcast stations just like a household TV. But in an age of multi-purpose gadgets, you might not want to add another device that you’ll only use once a week. Thanks to the fact that nearly every NFL game can now be streamed online, through official channels, any device that gets you on the internet is now a portable portal to your Sunday broadcast. If you’re lucky enough to have Wi-Fi coverage in your parking-lot, you can stream on your favorite tablet. Otherwise, you’ll need something with a data connection, like an iPad with 4G capabilities, which will let you get online from just about anywhere. Then, find out what site or app will be streaming your game. The Denver Post has a great run-down on how to stream every single game this football season.

Of course, for some, a 9-inch screen just isn’t large enough for watching a big game. For the truly dedicated tailgaters, only a full-sized LED TV will do. You can plop down a 60-inch 4K TV on a folding table in the middle of the parking lot, attach an OTA antenna, and you’ll be pulling in HD broadcasts in no time. Just one small problem: finding somewhere to plug your TV in. To solve that issue, you’ll need one of two things, either a power inverter or a power generator. An inverter is a small device that plugs into your car’s cigarette/12v socket and converts the vehicle’s DC power into AC power, giving juice to anything with a standard wall plug. But you’ll have to be careful while running a large TV, because this is a good way to kill your car battery. Larger, higher-capacity batteries, like those in large trucks, will fare better, but it’s still a good idea to start your car every so often to keep the battery charged. Or, invest in a separate battery that’s dedicated just to powering your TV (but make sure you remember to keep it charged!). Also, make sure that the inverter you choose is rated to handle the wattage that your TV consumes. 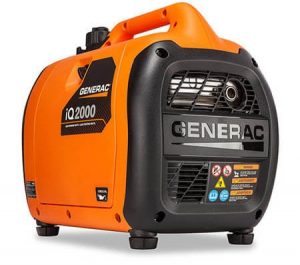 With a portable generator, you can power up a TV anywhere.

A better option (though more expensive) is to invest in a portable gas generator. Small, modern generators, like the Generac iQ2000 generator, are quieter, more efficient and easier to use than the old, rumbly diesel models that might immediately come to mind. The major upside to using a generator is the increased power capacity it provides over a car battery. With a 2000 watt max output, you won’t have to worry about running a large TV, and maybe even a small electric heater during late-season games. You’ll also save wear and tear on your car engine and electrical system. Plus, an added benefit of owning a generator is being better prepared at home in the event of a power outage.

Of course, there’s one more option. Become friends with someone who has a ride like this insane Chevy Avalanche that our car audio team outfitted with a slew of gadgets to make it the ultimate tailgating truck:

With the cooking and entertainment options set, you can focus on a season filled with stadium Sunday Fundays. But we know not everyone’s into the noisy crowd scene. If you prefer watching the game in the peace of your own home, there’s no better way than in a dedicated Fan Cave. Stay tuned, as next week we’ll look into some ways to create the ultimate fan cave at every price point.