We’ve spent some time discussing the unpredictable weather that’s been striking much of the country this summer and the destruction it can cause, and how to be deal with flooding and other problems that follow. While you can never prevent these problems, you can always to your best to be prepared. Sometimes being prepared involves stocking up food, readying a generator, and bracing for all-out devastation. Other times it involves thinking smaller, like having a flashlight ready or keeping in contact with the outside world. When Hurricane Sandy bushwhacked the East Coast last year, many areas in the storm’s path were without power for days. We all saw the photos of New Yorkers on the street, huddled around power strips set out by Good Samaritans, hoping to get a charge on their cell phones long enough to call into work or notify far-flung family members.

It turns out there’s a single product that doesn’t cost too much and is easy to stash in a drawer that can help with all of these potential problems in an emergency: The Eton FRX3 Digital Weather Radio. I pulled an Eton FRX3, one of a series of Eton emergency radios, off the salesfloor to take a further look at it. First impression: this is an odd looking device. But after just few minutes I already appreciated its versatility. 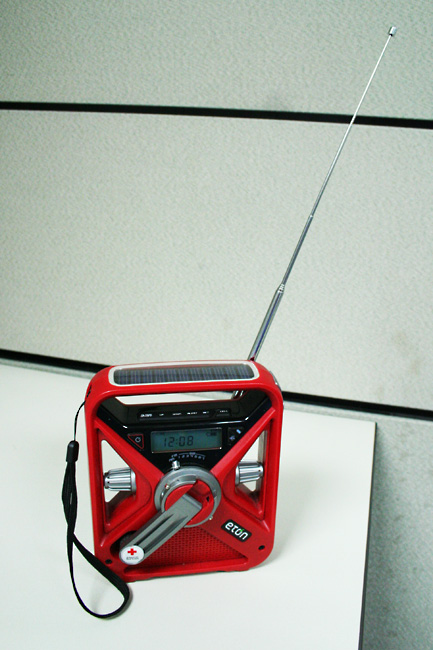 The Eton FRX3 with antenna extended.

The Eton FRX3 is first and foremost a radio, capable of receiving FM, AM and NOAA Weatherband frequencies. A selector switch lets you choose which band you want to tune in, and tuning is done with the right-side grey knob. Volume is controlled by the left-hand knob. Dialing in an exact frequency is quite simple, thanks to the FRX3’s digital tuner, which adjusts frequencies in 100 kHz increments. The telescopic antenna proved adept at receiving a signal for all but the weakest FM stations, even in my cubicle far from any windows.  Just outside of Chicago, I was also able to tune in to weather band channel 7 (162.550 MHz) for a clear and accurate description of the current forecast. The Eton FRX3 won’t win any awards for sound quality, but it was adequate for casual listening. The important thing, of course, is that you simply get the news. Turning on the FRX3’s “alert” function puts the radio in a standby mode that will automatically broadcast emergency weather alerts as they hit the airwaves. 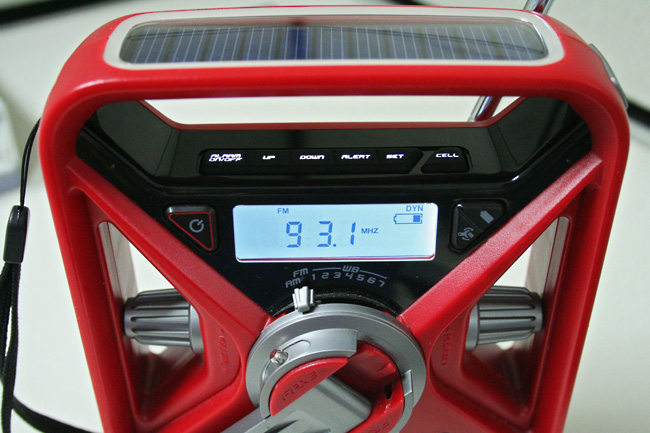 The main LCD panel of the FRX3. It stays illuminated for a few seconds after you change the dial. Volume knob on the left, radio tuning knob on the right. Above it are buttons to set the built-in alarm. To the right of the display are the buttons that choose between using the AAA batteries or the internal, dynamo-charged one. On top of the handle is the solar panel, which is surrounded by a glow-in-the-dark trim.

On the right side of the Eton FRX3 is the built-in dual-purpose LED lamp. One press of the button turns on the standard white light flashlight, which does a great job of illuminating dark areas. Press the button again and the lamp switches to emergency beacon mode, which flashes the single red LED in a distress strobe action.

What’s unique about the FRX3 is, like many Eton radios, its multiple power source options. Open the hatch on the back and you’ll find slots for 3 AAA batteries. We all know that you never have batteries when you need them, though. Thankfully, there’s an internal, rechargeable battery. But say that one’s dead. Okay, then plug the USB cable into a charger or powered USB port to recharge it. But the power’s out because of the storm. No worries, the solar panel on the top face of radio will automatically recharge it. But there’s no sun because, well, storm, remember? Okay okay okay. In that case, the Eton FRX3 deploys its secret weapon: the dynamo crank. 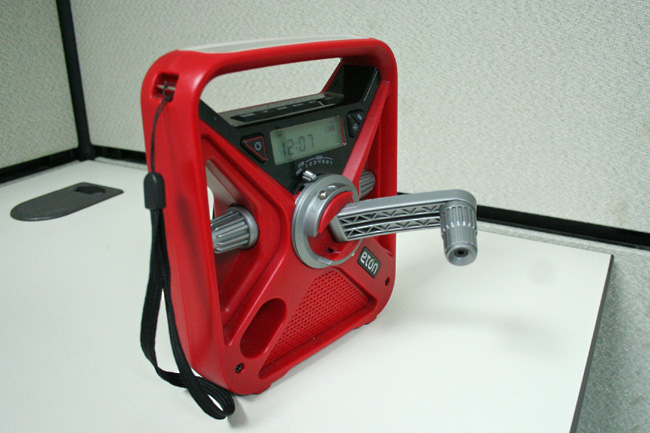 The dynamo crank might sound like a pro-wrestler’s finishing move, but it’s actually just a simple, nearly fool-proof way to create electricity. Fold out the grey arm from the front of the radio and get cranking. Using the same basic principles as a gas-powered generator, you’ll start creating electricity—and charging the internal batter—instantly. Just 90 seconds of cranking got me nearly five minutes of radio time. 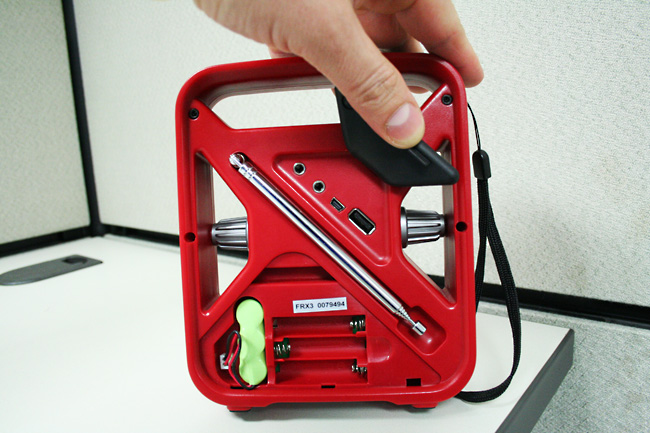 Under a flap on the back panel are the Aux-In and Headphone ports, DC-input port and cellphone charging USB port.
Below that is the battery bay, with the rechargeable battery in place.

According to the manual, 90 seconds of hand cranking should get you 5 to 7 minutes of radio time or about 20 minutes of flashlight use. That might not seem like much, but Eton doesn’t intend for that to be the main power method. The allure is the ability to produce electricity—and subsequently have access to outside news and a powerful flashlight—on demand, even if for just a few minutes.

Perhaps the most interesting feature of the Eton FRX3, and the one that will make it invaluable during serious disasters, is its ability to charge your smartphone. Once you’ve got some power stored in the internal battery, either through the solar panel or the dynamo, you can dump that charge into your smartphone via USB cable. Now, don’t expect to get a full charge and while away the stormy night playing Candy Crush Saga. But it will be enough to call for help when power and phone lines are down, which can sometimes be a matter of life and death.

So, in one small device you’ll be able to receive news, light your way around a dark basement and keep your cell phone charged during critical events, thanks to its multiple power sources. I appreciated the logical (if weird-looking) design, and small touches like the glow-in-the-dark trim around the solar panel that ensures you’ll be able to find your FRX3 when the lights go out. If I could suggest an improvement to Eton, it would be that they make it a little more rugged, or perhaps introduce a higher model that’s more robust. It’s not that the FRX3 is flimsy, by any means, it just feels as though it might not fare well after a hard tumble onto concrete, which is something likely to happen in a disaster. It’s also not waterproof, which would be indispensable in a storming/flooding situations. Overall though, it’s a device that I think should definitely find its way into any home in areas prone to unpredictable  weather or natural disasters. At $55, it’s inexpensive enough that even if you never need it, you won’t feel like you wasted money. And when you do end up needing it, you’ll be glad you bought it. 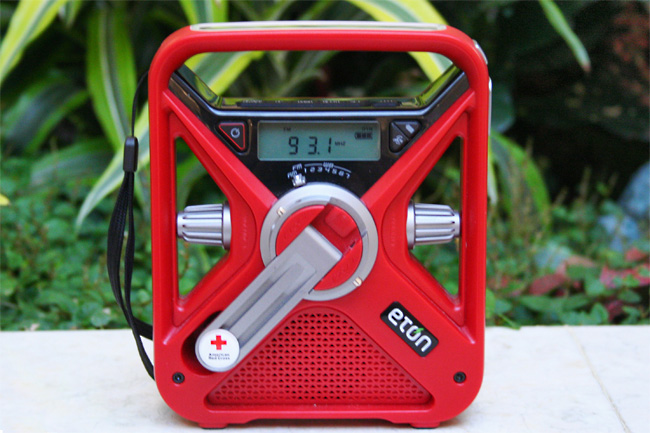 The FRX3 in the wild.

Save on Nikon at Abt Electronics
Technologist Tuesday: Video Killed the Radio Star
0 Comments
By Pete R