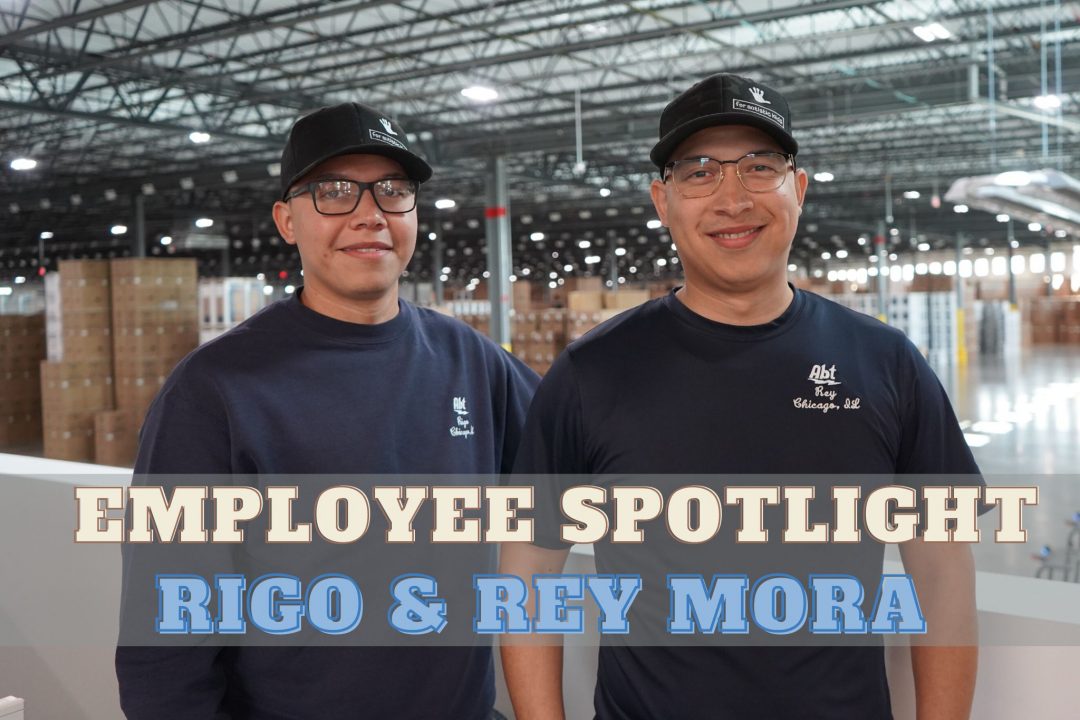 As the end of summer approaches, we’re excited to announce that August’s employee spotlight focuses on another duo here at Abt: Rey and Rigo Mora. These two members of the Abt family began their tenure at a young age and worked their way up. After being referred to Abt Electronics by a friend, Rey started working the third shift in the warehouse. A year later, his brother Rigo joined him in working the late night to early morning warehouse shift before the store opened.

14 (and for Rigo, 13) years later, the Mora brothers have gone from unloading boxes to managing the entire warehouse. They’ve held many different positions between now and then, from training new hires to smaller manager positions. One of their largest projects was to combine Abt’s three warehouse shifts into two, and it went off without a hitch. And the most amazing part? They keep our entire warehouse (over half a million square feet of space) completely organized, functional and spotless every day.

When asked what some of their favorite memories were here at Abt, they responded that they loved “getting to know and learn from Bob Abt, who ended up having a huge impact on both of our lives. He was an inspiration and we strive to continue to do things the way he taught us, with the mix of the new generation who carries on his legacy.”

While the Abt family has always strived to make a positive impact on every one of their employees, the Mora brothers are looking to the future, too. When asked what they love about their jobs, they responded that it’s all about “taking on new challenges and seeing progress and growth of what we have been able to accomplish in the warehouse. We love having the ability to hire people and see them progress within the company. We strive to help our employees reach their full potential and help them meet their goals. Whether that be to attain a management role in the warehouse or get promoted elsewhere. We take a lot of pride in that and love seeing the personal development and growth within our team.”

These two brothers are two years and two days apart. And out on the floor, they look alike and dress alike (in Abt uniforms with edgy eyewear). Fellow employee Mike Lopez described the two as hard-working brothers that have never asked for recognition or a shout-out. But we’re excited to showcase just how amazing these two warehouse managers are.