Monday was National Book Lovers Day (!) and while Abt is most well known for next-gen technology like 4K TVs and gaming consoles, we know that reading a gripping story can be just exciting as watching a film. Sometimes more. That’s why this week, we’re turning away from moving pictures and toward big literature. With thousands of books available at just a tap on your tablet, picking a book to read in your spare time can seem like a big investment. 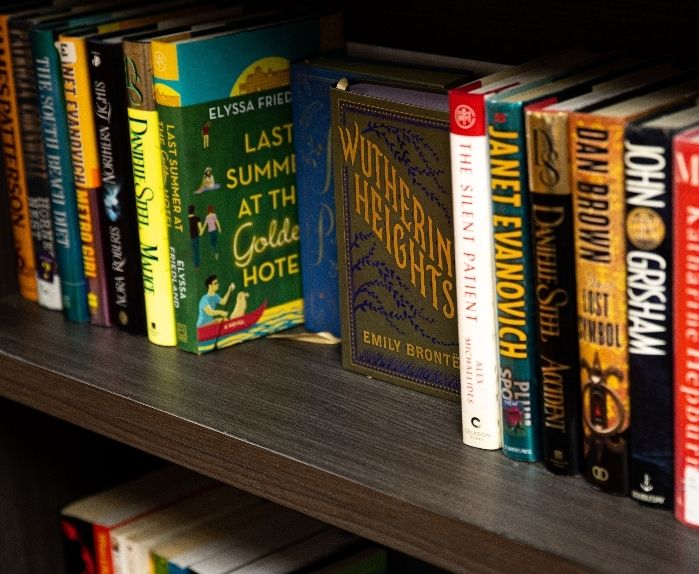 But you actually might have more time to read than you previously thought. A lengthy commute driving a car or riding on a train is ample time for audiobook listening. Meanwhile, a half-hour away from your news app with an eBook might be just what your mind needs to calm down for the evening.

In our time away from the appliance sales floor, we’ve picked out some of our most recent favorites. Read on to discover some of what Abt’s team members are reading, whether that’s via tablet, smartphone, eReader, audiobook or just classic hardcopy.

The Book: One Day In December by Josie Silver
What’s On The Back Cover:

Laurie is pretty sure love at first sight doesn’t exist anywhere but the movies. But then, through a misted-up bus window one snowy December day, she sees a man who she knows instantly is the one. Their eyes meet, there’s a moment of pure magic… and then her bus drives away.

Certain they’re fated to find each other again, Laurie spends a year scanning every bus stop and cafe in London for him. But she doesn’t find him, not when it matters anyway. Instead they “reunite” at a Christmas party, when her best friend Sarah giddily introduces her new boyfriend to Laurie. It’s Jack, the man from the bus.

Why Monika Fell In Love: The way the book was written really made it interesting. It’s not often that you could say the format of a story makes it amazing, but that was true in this book. Switching between perspectives, dates, and even years (ten whole years!) made this romance really enjoyable. It was nice to unplug from my life, plug in my wireless earbuds, and listen to this book on my way home from work.

The Book: Fahrenheit 451 by Ray Bradbury
What’s On The Back Cover:

Guy Montag is a fireman. His job is to destroy the most illegal of commodities, the printed book, along with the houses in which they are hidden. Montag never questions the destruction and ruin his actions produce, returning each day to his bland life and wife, Mildred, who spends all day with her television “family.” But when he meets an eccentric young neighbor, Clarisse, who introduces him to a past where people didn’t live in fear and to a present where one sees the world through the ideas in books instead of the mindless chatter of television, Montag begins to question everything he has ever known.

Why Ben Kept Reading: What I love about Fahrenheit 451 is that Ray Bradbury is able to create a very poignant commentary on censorship in the media within the confines of an exhilarating adventure novel. Also, every scene with that metal doggo was pretty heckin scary.

This veteran of the banned books list is one lots of people have marked up for English class, but I’m currently reading on a tablet that goes everywhere with me. Tons of tablet eBooks let you take digital notes without traditional pens and highlighters. One of my friends actually listened to the audiobook while he read on his tablet too, and that helped him to catch details he originally missed.

The Book: My Sister, The Serial Killer by Oyinkan Braithwaite

What’s On The Back Cover: When Korede’s dinner is interrupted one night by a distress call from her sister, Ayoola, she knows what’s expected of her: bleach, rubber gloves, nerves of steel and a strong stomach. This’ll be the third boyfriend Ayoola’s dispatched in, quote, self-defense and the third mess that her lethal little sibling has left Korede to clear away. She should probably go to the police for the good of the menfolk of Nigeria, but she loves her sister and, as they say, family always comes first.

Until, that is, Ayoola starts dating the doctor where Korede works as a nurse. Korede’s long been in love with him, and isn’t prepared to see him wind up with a knife in his back: but to save one would mean sacrificing the other… My Sister, the Serial Killer is a blackly comic novel about how blood is thicker – and more difficult to get out of the carpet – than water…

Why Michelle Loves These Murderesses: I’m a huge fan of dark comedies, and what’s funnier than murder? This book’s exploration of family dynamics in Nigeria is fascinating and despite the wild plot, the relationship between the narrator and her sister is super relatable. This book is definitely a page-turner but I also loved reading it on my iPad.

The Book: A Thousand Ships by Natalie Haynes
What’s On The Back Cover:
From the Trojan women whose fates now lie in the hands of the Greeks, to the Amazon princess who fought Achilles on their behalf, to Penelope awaiting the return of Odysseus, to the three goddesses whose feud started it all, these are the stories of the women whose lives, loves, and rivalries were forever altered by this long and tragic war.

A woman’s epic, powerfully imbued with new life, A Thousand Ships puts the women, girls and goddesses at the center of the Western world’s great tale ever told.

Why I Went on the Odyssey: The Trojan War is one of the most riveting ancient Greek legends (though it is a slow-burning ten-year story) and the fallout is often more exciting than the war itself. But Haynes has turned the eye of history and the voices of the muses to examine the unsung heroes of the mythology: the women. Goddesses, queens, wives and young girls all have their say between these pages. Almost better than the story itself is the shining cover art. I normally prefer my headphones and audiobooks so I can listen while exercising, but I had to buy this one’s hardcover version.

The Book: Fans: How Watching Sports Makes Us Happier, Healthier, and More Understanding by Larry Olmsted

What’s On The Back Cover: There are thousands of books about sports. This book is about sports fans. Citing fascinating new studies on sports fandom, Larry Olmsted makes the case that the more you identify with a sports team, the better your social, psychological, and physical health is; the more meaningful your relationships are; and the more connected and happier you are. Fans maintain better cognitive processing as their gray matter ages; they have better language skills; and college students who follow sports have higher GPAs, better graduation rates, and higher incomes after graduating. And there’s more: On a societal level, sports help us heal after tragedies like 9/11 and the Las Vegas mass shooting, providing community and hope when we need it most.

Why Michalla Roots for this Read: You can find hundreds of books on sports but not many on the fans that watch sports. That’s the beauty and brilliance behind Fans by Larry Olmstead. The best part of this book is the fact that it breaks the stereotype that we all sit at home lazily and scream at our TV’s while watching our favorite teams. I love how Larry uses studies to show how sports actually can make us healthier, bridge a generational gap and can heal us after tragedies. I am undoubtedly a fan of fans and would recommend it to all sports fanatics out there!