Today is officially the first day of the annual Consumer Electronics Show, but things really kicked off last night around 6:30 when Microsoft chairman Bill Gates delivered his keynote address. Gates announced, among other things, that NBC has chosen Microsoft as its exclusive video partner for online video footage of the 2008 Summer Olympics, both live and on demand. There was also an amusing video of Gates going through a gym workout with actor Matthew McConaughey, and Gates was later joined onstage by noted guitarist Slash during a tongue-in-cheek live version of the popular video game Guitar Hero 3.

For me, the first-day product highlight was an up-close view of Panasonic’s new 150-inch Lifescreen Plasma TV, not that I had to get especially close just to see it. This amazing TV features 4000 x 2000 resolution, which is four times the resolution of 1080p, but no pricing has been announced yet (it’s sure to be pretty expensive). Try to see one of these in person if a store near you happens to acquire one in the near future. You won’t believe the size and the clarity of the picture.

Confirming that super-thin is in, Panasonic also has unveiled a line of 1-inch thin plasma TVs, but they’re not expected to be available until 2009. Not to be outdone, Sharp has introduced a line of ultra-thin LCD TVs.

Pioneer is showing off its super-thin 9mm Kuro TV, which makes it thinner than an iPhone. Pioneer also is bringing out the Elite SC-09TX amplifier and AV receiver combination. This fully network compatible 200-watt receiver weighs 90 pounds and will be shipping within 60 days. The cost? That would be around $7,000, but if you’re after incredible sound, this is the receiver for you.

We’ll be delivering daily updates from the show, so be sure to check back here throughout the week for the latest developments.    –by Jon Abt 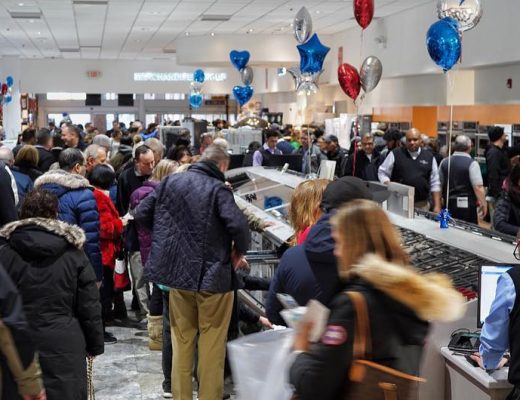 The Abt Customer Appreciation Sale is Here

Windows Phone-RSVP to A Night Out!